Once and A Year

A double dose of musical theater this weekend and what riches we enjoyed! 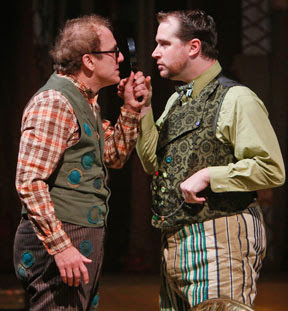 The shows A Year With Frog and Toad and Once collected fourteen Tony nominations between them; both tell poignant stories of deep love between close friends. That the two best friends in Chicago Children's Theater's production happen to be amphibians who speak in the most simple prose does not lesson the depth of their devotion nor the breadth of their charm. Arnold Lobel's wise stories have been adapted and set to music by the brothers Robert and Willie Reale, who mine the source material for humor as well as moments of sweetness. Toad, the more impetuous of the pair, gets huge laughs responding "Bleh!" to the hibernation wake-up calls of his friend and yelling "Grow!" at his newly planted seeds.

I was happy to see my favorite of Lobel's stories on the stage and entranced by the soft shoe dance moves that were perfection in their simplicity and grace. Good friends need little more than each other and less is more in this production. Pared down prose becomes poetry ("When you are sad, I am sad. That is how we are...") and all is well. 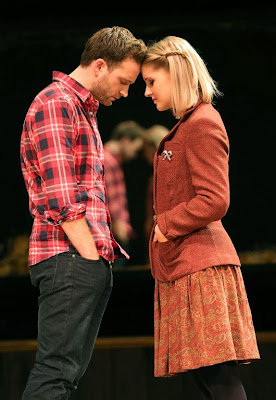 The beloved indie film Once has a minimalist charm of its own, with its handheld camera shots of first time actors on the streets of Dublin. The story is a slip of a thing, five days in the life of a busker and a house cleaner, young and unnamed, who decide to make a demo tape together and almost become involved. Any fan of the film would enter the Broadwayified show with trepidation, but have no fear; all of the music remains and a new kind of magic is forged.

What makes the production stand on its own merits separate from the film is the creative staging -- a single set of an Irish pub that transforms into a music store, a cramped bedroom, a beach at dawn, through movement, suggestion and our imagination. The naturalism begins even before the show starts, when the audience is invited on stage to buy beer and wine from the bar. A piano is rolled out by stagehands and a crowd of unmiked musicians begin what appears to be an impromptu concert of Irish and Czech folk songs, culminating in a heartbreaking acappella rendition of "On Raglan Road."

The Broadway-style emoting from the pretty leads of Once at the Oriental Theater did leave me missing Glen Hansard's quiet charisma and Marketa Irglova's honesty and lack of guile. But you can't deny the gorgeousness of the songs nor the copious talent that makes them come alive onstage. The entire ensemble sings and plays and acts with such skill that their instruments become extensions of their characters - the passionate violinist, the banker-with-a-dream cellist, the animalistic drummer -- well, come to think of it, those are pretty stock characters, but they are vivid and new when they play these well-known songs with invention and love. While "Falling Softly" is treated with kid gloves, the song "Gold" has been reimagined from a few measures in the film into the beating, glowing heart of the show. A beautiful show.
Posted by Cindy Fey at 9:02 PM

Email ThisBlogThis!Share to TwitterShare to FacebookShare to Pinterest
Labels: theater