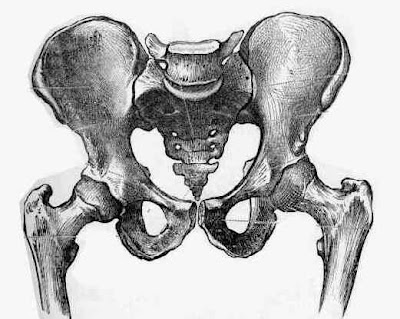 In yoga class today we did lots of poses that the instructors call "hip-openers" which has a bracing and benevolent sound to me, something like an eye-opening first cup of coffee. The poses have sweet names too, like Frog and Butterfly and Mermaid, but the reality is a kind of serious stretch that separates the knees so far they start to miss each other.

I was weeping as I tried to breathe through it all, glad for the occasional Downward Facing Dog to hide my contorted face and wet eyes. It wasn't a physical pain that was moving me to tears, though. I wept for a couple of reasons, one of which was the opposite of pain.

The ease with which I lowered myself into Pigeon was a reminder of how far I've come since dislocating my left hip thirty-odd years ago. A body cast entombed my body after surgery and when my limp white leg emerged from the plaster dust six weeks later, I had to relearn how to walk.

Now I have that survivor's pride I've heard from the boy, now man, who was injured far worse than me in the same car crash - we both recite how much we are able to do physically, the mountains climbed, the hills skied, the ocean floors explored.

Yesterday I wasn't really crying for me, though. A two foot model of the human skeleton stood on the sound system in the corner of the room, its back turned to me. Someone in the class had a cigarette before coming in and every time I got another whiff of stale smoke and heard the instructor say the word "hip" again, I thought again of Phil and got caught up in another flood of emotion.

My uncle Phil fell two weeks ago at home and broke his hip. He had been using a walker, but it was late at night when he got out of bed and the bathroom is small and his feet must have just betrayed him.

Phil had a hip replacement surgery four days later and now he has been moved to an assisted care facility in Overland Park, Kansas, near his home. Phil's two daughters take turns driving Ruth, his wife of more than sixty years, to the facility each morning and then pick her up at night after a day of reassuring Phil and helping with his eating and physical therapy. "I feel like I have a job," says Ruth, in her typically brisk and indefatigable way. She is navigating the seas of insurance and doctors' advice, therapists and new schedules, and Phil's stormy emotions and frequent confusion with great courage and aplomb.

I want to be there. I will be there soon. But Ruth says, "there's not much you can do," and I have a job of assistive care myself, here. Two little sets of perfect hips still need my help with cleaning, since their own spotty self-care sometimes leaves them with an unmistakable scent and tell-tale smears in their Tinkerbell undies. They claim they need help dressing themselves, although the sudden burst of energy they get after disrobing reveals they just love the natural state. Mia runs from bedroom to bedroom, screaming, "Naked!!"

Once I've wrestled her into clothes, Nora throws her hips up over her head and does headstands on the couch. She shows me what she calls Wisdom Pose, learned in Montessori. It's crossed legs, hands resting on knees, middle fingers touching thumbs in an Buddhisty "O" and closed eyes. Other times she slips into positions that look familiar from my classes; they are just the spontaneous dance moves that being young and wriggly make you bust into.

At the end of yoga class yesterday my tears were dried and I was restored - that's what the practice does. I would call Ruth when I got home, send Valentine flowers, plan flights with the girls. I walked over to the skeleton model on the stereo to take a closer look. Before I had my hip surgery at the age of 11, I got really familiar with doctors using a fist covered with the other hand to demonstrate how the ball-shaped end of the femur fits into the socket of the pelvis. I touched the hard white plastic wings flaring like elephant ears from the little skeleton's pelvis, wondered at the strange angle at which the femoral head juts away from the rest of the bone.
Posted by Cindy Fey at 2:07 PM 3 comments: