The Arc and The Gyre

I turned 52 this month, this awful month when we said goodbye to our dear President and his beautiful family and now watch in horror the awful baseness that follows.

All the complicated feels accompany this birthday, including a daily dread at dawn temporarily lifted by quick good morning moments with the daughters and by my fast walk down the freshman hall arriving at work, coat and hat still on, down the freshman hallway where the fourteen year olds lounge, finishing homework or watching videos on their phones or squealing with joy while being showered with birthday hug and balloons, or once, strumming a ukulele.

These tall children, taller than me, are still sweet, still distracted and entranced by tiny pleasures, still open to the goodness of the world, still needing. They ask for Band-Aids, for candy, for breakfast, for stressballs to squeeze as they work. The ninja Band-Aids I found at Paper Source charm them; they really just want a sticker.

I smile when I am with these adolescents, I smile as I walk down the hall, I smile because of them and I smile for them.

They are still sweet and I am working to hold on to that sweetness because bitterness is so close to the surface right now and I've discovered this gob-smacked season that there are worse ways to become than the peppery anger bite of bitter.

There is sour. Apathetic, cynical fat-free-plain-yogurt-water sour. I woke that clear November morning after the monster got his 62 million votes and waited for the quiet to be broken by sirens. Knew they were coming.

It's the last thing I want to become in this second half of life, (please let this be the second half.)

At this age I'm trying for unagi instead of sour, if I can, if my senses and pleasures are dulling, at least leave me the good meaty richness of work and sustenance and love as a verb and comfort in our daily family rituals, dinner and dishes, homework, reading, our ablutions before bed as the girls and I meet in the hall with their hairbrushes to compare how little Nora still is and look Mia, touch this! how soft Nora's cheek still is and has Mia grown taller than me yet?

The girls don't remember any president but Barack. I do, all the way back to a fuzzy memory of sitting on the floor in front of my grandmother's black and white TV and watching Richard Nixon resign. But even though Reagan and Bush and Bush were painful, they were men who knew the meaning and responsibility of being "public servants." Not this one.

Please let me see this unexpected curve in the road, this car-wrecking turn for the fragment that it is, a brief pang of pain in America's long life.

I have a choice here. To either see this curve as a part of Yeats's gyre, the monumental rotation of a world spinning off its axis. Or I can see the spiritual and literal darkness of this November, December, January, as an essential part of our color spectrum, an edge of the rainbow, a curve of time, the arc of the moral universe that continues and will continue farther than I will see.

Principle Six: The universe is on the side of justice.

The fury I feel as I listen to the alternate facts, to the sycophants, to the enemies of logic and justice, this fury is a kind of violence I need to contain and understand. It can harm and exhaust me and those in my wake.

I call on my strength, the gift from the one who made me, loved me and then left me against her will. At the beginning of my life my mother worked the neighborhood, having conversations with parents in our neighborhood to consider desegregating the western Chicago suburbs. The Sunday before she took flight she worked Sunday School at our neighbor Catholic church, teaching the special needs children down the hall from my father, who had a class of his own.

I take to the street, join the crowd in the cold on Michigan Avenue in the shadow of the Fine Arts Club where Mike Pence is guesting a Republican fundraiser brunch. We shout in the cold, chant "Racist, Sexist, Anti-Gay, Mike Pence, Go Away!" A Mike Pence imitator with the moniker Hot Pence runs around with silver fox hair, a suit coat and tie and bright red short-shorts.

I pick up a wooden cross bearing a name of an 84 year old woman killed in Chicago this year. The cross is made of rough, unfinished wood. It's heavy. The woman standing next to me as we prepare to march has no gloves and puts down her cross to worry at a splinter. I give her an extra pair I have in my purse, then ask her little son to show me his hand-lettered sign.

I fly to DC, stay with my cousin Mickey, take a packed train from Reston, talk about the landed gentry origins of the conservative movement with a history teacher on the Metro, join the chanting crowds in a slow joyous shuffle up the escalators and out of the train station, all of us thrilled with the size of us all together, laughing at the excellent signs, the Lincoln and Hamilton costumes, the Sousaphone pounding our heartbeats and spelling out curses in lights from its black bell, the children, the helpful transit workers, the tables of Obama merch (I'm tempted to hug the sellers until I remember they were here selling Trump stuff the day before), the choirs, the marching drum ensemble, the Jumbo-trons and loud speakers, Michael Moore and Ashley Judd, Janet Mock and Van Jones and Maxwell's ethereal voice floating "This Woman's Work" over the crowd. 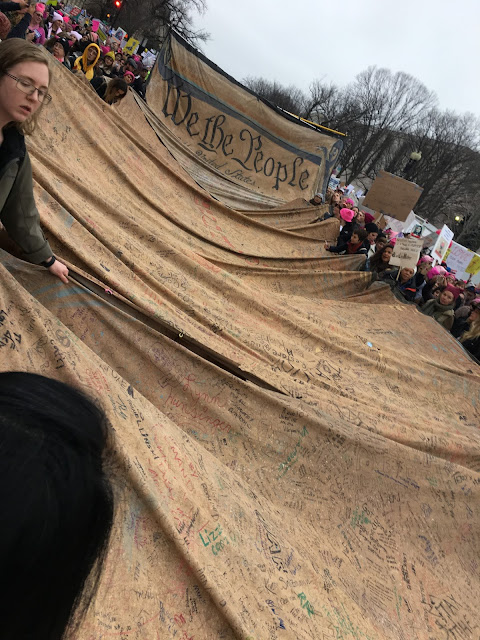 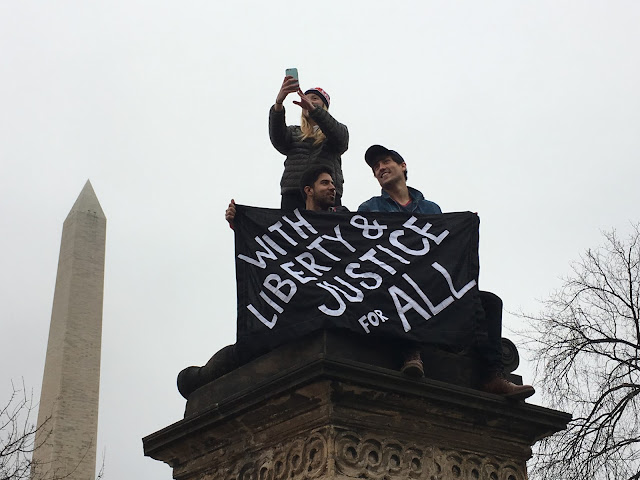 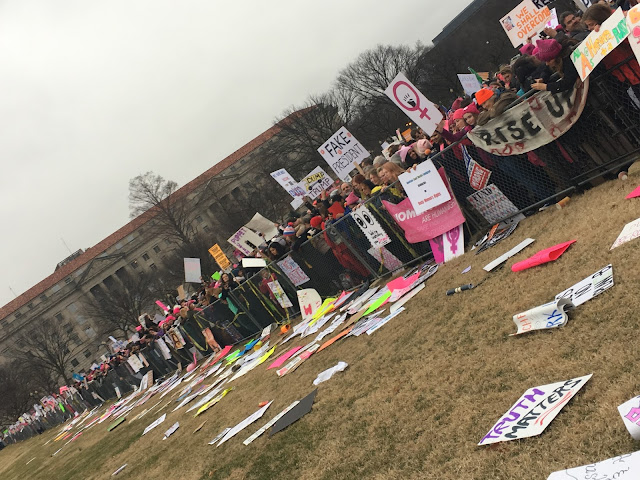 A lovely girl stops me and points to my Wear Orange hat. "Moms Demand Action!" she says and we trade excited updates, I missed the gathering at the Museum of the American Indian but there's a warming room at the Holiday Inn, she tells me, just show my hat and I can use the bathrooms and power my phone. I'm so grateful and that rest stop is deeply appreciated, the forty-five minute wait in line better than the pissing behind the parking garage option I hear about.

We start to hear about other cities but the overhead telephoto shots of thousands at a time will have to wait for the news tomorrow. Right now we can only feel the masses pressed together, "I can feel people's cell phones vibrating!" says a woman next to me, but no one feels crushed that I can see, even wheelchairs and motorized carts and double strollers are welcome in this tight scrum.

There are rumors that the march has been "cancelled," but we are still all pushing toward the Mall and once an ambulance nudges through, some invisible barrier is removed and we are moving, moving. I cross the Mall from Independence to Constitution, thrill to the Capitol and Washington Monument, join the stream again at the Museum of African-American History, call and sing and chant and yell "Black Lives Matter" with every punched word raging at the absurdity and bad faith and mendacity and doublespeak of Trump and his toadies and puppeteers. A giant Constitution is unfurled, signed by hundreds of living Americans. The crowd up 15th goes as far as I can see.

We maneuver around a corner, the crowd opens up and it's there, the Ellipse in front of the White House. A kind of destination, but despite the Wicked Witch costume and the young girl who borrows a phone to tell her contact, hilariously, "We're between the Washington Monument and the White House. Next to a police car," I am falling down a bit under this gray sky in the late afternoon. We press against the fence, toss the cardboard signs, chant, cheer, jeer, "Welcome to your first day! We will not go away!" We can see black fortified SUVs in front of the White House portico and those hanging lights within. I'm blue but I don't figure it out until I head back east and north up 15th past the rows of food trucks and back into another marching crowd up as close as we can get to 1600. A portable sound system on a cart pounds out Beyonce's "Formation" and we find voice enough to scream again, this time in joy. A moving, marching, street dance party. 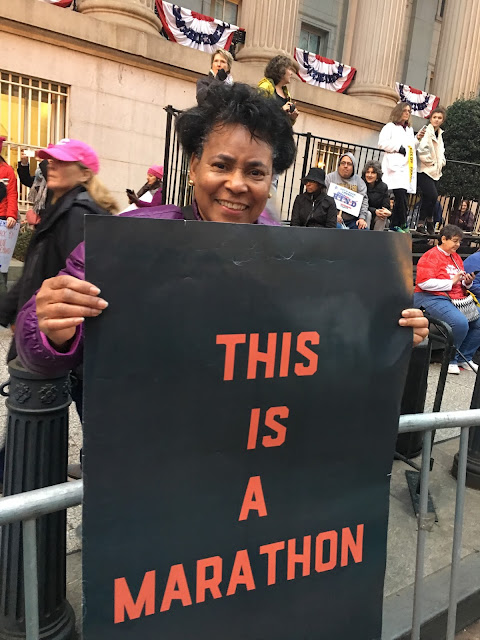 When I first saw this woman, she was not smiling. We have much to do. But I understand now when I hit the Ellipse and stopped moving forward, the energy dissipated. Get up, stand up, keep going. We are in for a long, hellish haul. We're stronger together and we can, yes, we can.

I had a dream where I was struggling to enunciate my frustration: "I. Keep. Making. Sandwiches. And. They. Keep. Falling. IN. THE. GUTTER!" In my dream, I bade Nora help me, as I do so often at home. She grimaced at the soggy bread, the disintegrating tomato slice, the slimy meat piece, but reached out with her thumb and forefinger to pick up my sandwich out of the sandwich gutter.

Randy laughed at my retelling of the dream but it's symbolic of everything these days. Nora is still my little helper and there are going to be so many times I am irrationally in need of irrational help. She knows, and her big sister knows that Mommy will storm and the storms will pass, and they buckle down and believe me when I wail, "This is not about you! This is not your fault! You haven't done anything wrong!" Randy still sometimes pushes back against the wind although he was a wise wise man the week before my birthday and ignored my furious howl to "CANCEL THE RESERVATIONS!" during a spat about (get this) whether he shared responsibility for the guinea pig since he had suggested the girls get a gerbil or hamster.

"It's the same thing!" says Mia, sensibly, and permitting the girls to witness our squabble is both unavoidable in this small house and, I would argue, healthy for them to see how grown-ups can be both silly and forgiving.

So despite all, the reservation remained intact and Bad Hunter was an excellent choice for my birthday dinner, with sunchokes and what the waiter called "hyper-fresh" radishes and nori-butter.
Posted by Cindy Fey at 8:17 PM No comments: