I stood like a penitent, head bowed, hands clasped and low. I could see my chest and my shirt jumping from the heart beating within, jagged up on adrenaline and fear.

Too many awful things to process, unsolvable problems I cannot fix.

Bad bad memories being dragging back into the light.

And a child sent away. 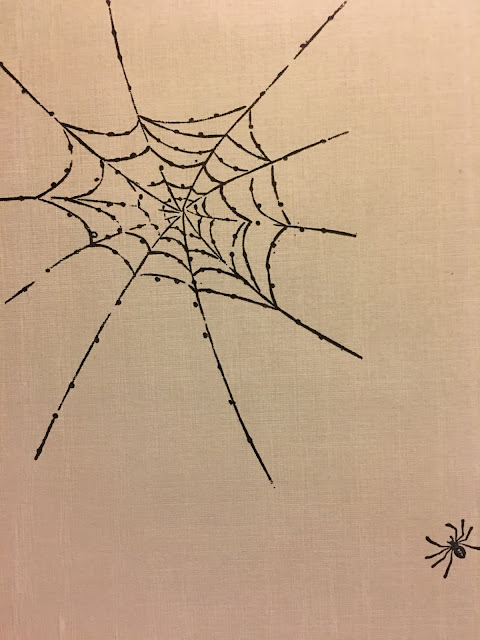 The Saugatuck rental house, the first of two on our August vacation, overlooked a broad expanse of Kalamazoo River wetland and had an outdoor shower on its north side. The morning was overcast but I still wanted that open air chill-hot frisson so I took my towel and the little travel bottles of shampoo and conditioner around the corner of the house. Overhead were trees trees leaves leaves green green and a spider's single persistent strand. His work gleamed like a cord and barely moved in the breeze. So strangely thick and strong it seemed that the next morning I was actually surprised to find it gone, as if I had forgotten that spiderwebs do not last more than a day.

"I'm taking the girls to my childhood vacation spots," I told a friend, "It's healing." Last summer Randy and I ventured into the Ozarks, not too far, but far enough to relive the hillbilly fun of Silver Dollar City. I had fantasies of picking wild blueberries with the girls in the Minnesota Boundary Waters but Campy Gatlinburg and the sleepy Smoky Mountains may be more our speed next summer. Now we were heading up to Crystal Lake where young Sally and I had a sandy idyll with her parents the summer of "My Sharona" and The Cars' "Let's Go."

Our cabin in the Congregational Summer Assembly family camp was a 110 year old Sears prefab with a pocket kitchen, original wiring and that sweet enduring smell of decades of woodsmoke. The current owner brought his three daughters here summer after summer since he bought it in 1959, said the printed history catalog of the camp next to the couch. The echos of the choir practicing for the weekend's production of The Sound of Music drifted up the hill. Every window was filled with the sight of enclosing pines but from the back porch where we had one lunch in our bathing suits, you could peek a sight of blue Crystal Lake through the trees. I could feel the happiness this place had brought its visitors and I could picture little ones scrambling up the built in ladder to the sleeping loft under the rafters and stepping down the steep winding stone path to M-22 and the beach beyond.

Are abundance and loss oppositional or can you entertain them both at the same time? When I took the girls to Gwen Frostic's studio, it was shocking how little had changed. Gwen has passed and the printing presses were still but the gentle clerk said they were only shut down for the afternoon. Here was the same wooden rail where I stood, watching the presses at work, but really thrilling inside at the glance I had caught from a boy in the shop who was not the boy who my stomach had been aching over since the beachside campfire at the Chimney Corners resort where I was staying with Sally and Aunt Joan and Uncle Bob. And this Gwen Frostic boy, a stranger, appears next to me at the rail and I'm rushing with girl joy and we talk side by side, watching the roaring presses for a minute and before he steps away to go away forever, he gives me a quick squeeze, an entirely welcome one-armed hug around my waist. But this was not the boy who liked me at the resort, this was a second miracle. TWO boys!? What wonders! I go from no boy to two in a single August week and it is only much later that I realize that my summer teen vacations may have been planned by the adults to avoid confronting the early August anniversaries of our family Hibakusha, the double bomb craters left by Chris and Nancy's deaths in the August 6, 1976 car accident outside Gravois Mills, Missouri. Now here it is, 42 years later and Nora is one year younger than Chris when he died and Mia is one year older and I take a photo of their playfully insouciant faces at the site of that unforgettable and cherished half-hug from an unnamed boy. And I placed another layer of goodness over the grief.

They will bicker and bitch on this trip, make up and go at it again. I will complain that they are not helping me pack up the car and they will drag themselves off their phones and down the hill to the parking spot with their loads of dirty laundry. We'll spend an afternoon at the ye olde farms of the Port Oneida Fair outside Glen Arbor and my heart will tilt at their few fleeting moments of scorn-free attention as the costumed volunteer helps them rub a wet shirt on a washboard, then squeeze it through the ringer.
Posted by Cindy Fey at 8:56 AM No comments: