The Ballhawks Movie Release is April 20!

Here's the new trailer Dear Husband cut for Ballhawks, a nine year labor of love from director Mike Diedrich. Just watch. You'll get chills. It's a film about heart and patience and faith and enduring love. It's funny and moving and thrilling. If you're a Cubs fan, you'll love it. And here's the thing -- if you're not a fan, you still get a kick out of the motley crew of unforgettable characters who wait outside Wrigley Field for the stray fly balls that come over the wall. There's insightful and hilarious commentary by other Chicago favorites, too: Bill Murray, NBC features correspondent Mike Leonard and the legendary Ron Santo.

Now for those of you who missed the showings at the Gene Siskel Center last year, here's the release you've been waiting for! Ballhawks comes out on Youtube on April 20. Yes, Youtube has movies. (Who knew?) Check it out this Friday! And tell your favorite Cubs fans -- they'll thank you.

http://www.youtube.com/movies
Posted by Cindy Fey at 2:11 PM No comments:

Up to the Mountain 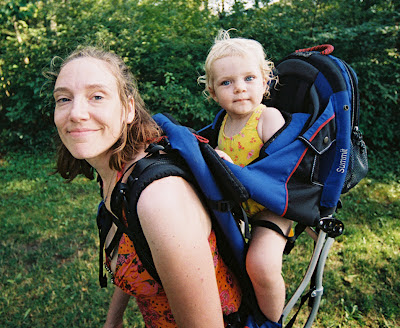 My first Mother's Day present arrived in a wrapped box three feet wide. Little seven-month old Mia gummed on a corner before I got a chance to unwrap my new baby carrier backpack with sturdy aluminum frame and immaculate blue canvas straps. The perfect gift.

It has been nine years since that happy day so I don't remember if it was my complaints about feeling housebound or just Dear Husband's wise intuition that spurred him to find me the precise thing I needed.

The carrier was more than just a tool to carry Mia while keeping my hands free and my sore back happy; it represented freedom. Now I could reclaim that important part of my life where every pine-scented breath was pleasure, where I had discovered the giddy high they call "mountain magic" when reaching the top of a steep pass, where I had found moments of epiphany and great beauty. And this time I could do it with a child in tow.

Mia and later, her little sister Nora, were easy burdens on the trail. In Grand Teton National Park, Randy and I laughed when other hikers would kid him about letting me do all the work.

"No, no, I want to!" I would insist as they passed. I could not explain. I was so happy to be in the woods with my family, the joy nearly lifted me like a balloon. The weight of the baby on my back felt like the only thing keeping me on the ground.

"I'm climbing to heaven!" I would call back to Randy.

Our ordinary days have been less easy. My girls and I have needed to tackle together hills of a different sort. They don't always have names, nor clear trail markers, and trying to bushwack a short-cut can leave you lost.

This year, Mia's ninth and Nora's seventh, has had some gorgeous scenery and some rocky roads. Helping Mia learn to ride her bike was less challenging than helping her through her passionate disappointment when she couldn't. As we persevere through music lessons, I'm clinging by my fingernails to the cliff's edge of hope that they will still love music on the other side. Allowing Mia to walk to school alone takes both great feats of will and great suppression of my imagination.

Sometimes the summit seems only a mirage. Parenting is a mountain range, after all, not a single peak. But even without photos of triumph at the top, these trails we're climbing together are bringing us closer together. And making us a family.

This post was inspired by Patricia Ellis Herr's book, Up: A Mother and Daughter's Peakbagging Adventure. You can read more posts inspired by the book at From Left To Write. I received a copy of the book from the publisher with no obligation. 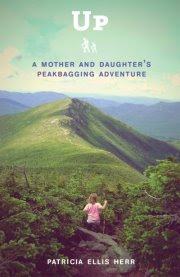 Links to this post
Email ThisBlogThis!Share to TwitterShare to FacebookShare to Pinterest
Labels: Patricia Ellis Herr, Up: A Mother and Daughter's Peakbagging Adventure

One afternoon last week, I made a big pot of pinto beans with bay and onion, garlic and comino, set the heat to simmer and picked up the red buckets we'd been using to save the vegetable scraps, mango pits and banana peels. I left the cool of the kitchen's concrete floor, slipped on my flip-flops at the screen door and stepped out into the Mexican afternoon. Crossed the palm grove, hopping over the irrigation ditches, past the mango trees to the sheep pen.

The sheep sounded like humans imitating animals, each with its own voice, deep bleats from the mamas and high squeaks from the black and white lambs. The first day I had been sure they were goats from their thin necks and blocky pupils and who would guess that sheep would thrive in the heat? But sheep they were and they rushed the fence and gobbled up the scraps I tossed, the larger ones with an aggressiveness to their mouths that was so delicate, it looked like voracious nibbling.

Our last night here a lamb would be born and the kind gardener who talked to me in Spanish I didn't understand and brought us fresh-picked cilantro from the gardens would pick up the newborn and let me pet his soft new black head. The gardener would say, "Spanish spanish spanish spanish" and then make some flinging gesture with his hand and a "fut" sound that I could only interpret as a demonstration of the quickness of the birth. But that afternoon, feeding the sheep, I had as little idea that any of these creatures were pregnant as I did the names and habits of most of the beautiful flora and fauna surrounding me. 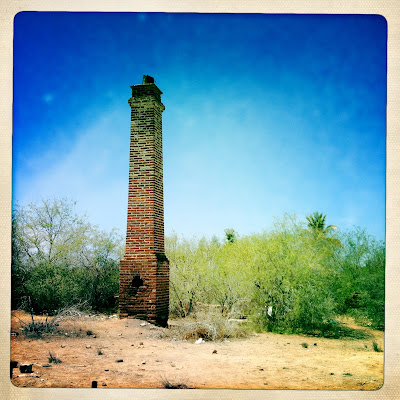 We were low in the huerta, the green oasis at the center of Todos Santos. The Sonora Desert surrounds the town on three sides; the muted pounding of the Pacific to the west lulled us to sleep every night. To reach this special hidden corner of Todos, we turned off the one paved road in town into an empty lot watched over by the sentinel of a lone chimney. A puppy chased a roadrunner across the dust and onto the broken brick walls of a ruin. At the far corner of the lot was a steep slope tilting down into what looked like a tunnel carved out of a wall of bamboo. The road was only as wide as our car and the green bamboo leaves brushed the sides and roof of our rental. A barbed wire fence bent under the weight of the undergrowth. We bumped and skidded over the ruts until we reached the gates of Hacienda Los Olivos. 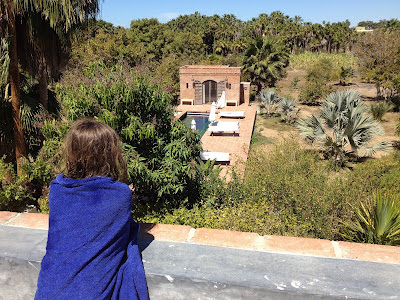 After saying adios to the sheep, I took my second bucket with the orange and lime peels and coffee grounds unfit for sheep consumption and dump them on one of the heaps of composting palm fronds. Headed to the little brick bodega (it's storage room in Mexico, not shop like in Puerto Rico and New York) for a load of swimsuit and towel laundry. We swam almost every day, either in the warm and gold-flecked surf at Los Cerritos or here in our colder green and blue tiled lap pool. We swam and shivered while the natives and ex-pats wore sweaters and scarves. But I was on vacation, dammit, and I said the same as I scooped in great chipfuls of Brent's guacamole and roasted tomato salsa.

"I'M ON VACATION!" roared the pleasure-seeking monster with her mouth full who was revived and made huge by the deliciousness of every corner of this place I love. 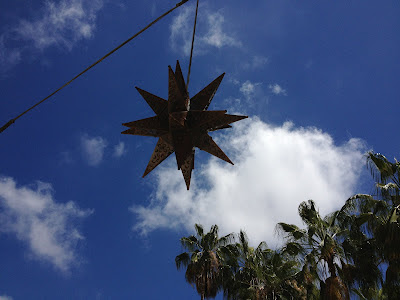 Every corner, seriously, even the sheep pen and the compost heap and the triangle of clothes lines beyond the pink flower bushes that residents call orchard trees where hummingbirds click surprisingly loud and hover in your path. I hung up the damp towels and thought, "Everything is a pleasure here."

(It's not a particularly profound thought - those kind, like My holy trinity is Memory, Imagination and the Senses, I would find on my long morning and dusk walks along the ocean or on the bare hills overlooking the town. And in the pages of The Fault in Our Stars, the devastating novel of smart, funny and terminally ill teenagers in love that I chose to bring, in my contrarian way, as a beach read.

"I believe," says the father, "the universe wants to be noticed. I think the universe is improbably biased toward consciousness, that it rewards intelligence in part because the universe enjoys its elegance being observed. And who am I, living in the middle of history, to tell the universe that I--or my observation of it--is temporary?") 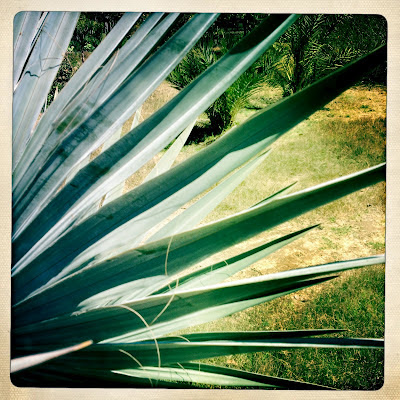 Everything is a pleasure to me in Todos. It's a simple truth, but it's a truth. I am most happy in Mexico. It is the kind of life I love most, among nature, family and friends, with careful use and reuse of limited resources, respect for craftsmanship and art, and beautiful food growing everywhere - one morning I ate a yellow-skinned grapefruit sawed off a high branch for me while my girls chased burros under the macadamia nut trees and it was a kind of mountain top experience. Don't think I have forgotten the privilege that affords this kind of stylish "austerity," but don't deny me the joy there, made all the more sweet by its briefness.

I hung the laundry listening to the hum of silence only broken by the occasional screech of peacocks from the farm next door. We never saw them; the stick fence between us was covered with a screen of rainbow lantana and orange sherbet trumpet vine.
Posted by Cindy Fey at 9:00 AM 2 comments: