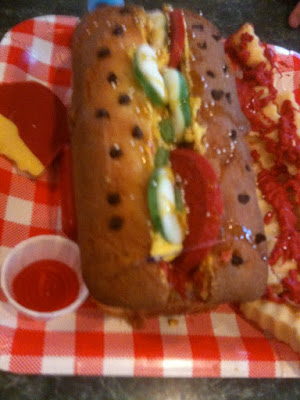 What's this? A Chicago style hot dog on a sesame seed bun? With its traditional tomato and neon-green pickle relish? And a side of fries with ketchup?

Creating this confection at the park district made my girls happier than eating the results.

Ew. And what's this? Some disgusting leftovers from a late night poker game? Can't you just smell the stinky soot? My throat is closing up and my stomach's churning, just from the sight of it.

Well this, my friends, was a savory course at Moto, where Randy and I had our recent eleventh anniversary dinner. A Cuban sandwich made with brined pork shoulder and pickles, costumed as a Cuban cigar. A Monte Cristo with Iberico ham and Manchego cheese disguised as a Montecristo smoke. And a veggie version with smoked and pureed red pepper for the illusion of burning embers. All wrapped in collard green "tobacco" leaves with edible wrappers. White and black sesame seeds were finely ground to give the illusion of ash, then freeze dried so a misty "smoke" wafted up as the dish was served.

A burst of laughter and "That's disgusting!" was my shocked reaction when this Halloween dish arrived at our table. "That's a new one," said our waiter. "Although I have heard, 'I'm not eating that.'"

And I almost didn't. Had to lift my napkin and hold it between my eyes and all the repugnant baggage those little sandwiches held.

"Now I know what the girls feel like when I offer them a new food," I told Randy. I think I could more easily have eaten a cricket. Of course, they were delicious. 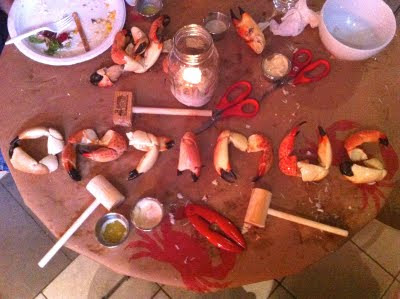 And finally, not really an optical illusion, but cute nonetheless. The remains of one of the celebratory lunches for the Optimus 15th anniversary week. They also munched on Big Star with a side of live mariachi band, Donut Vault for breakfast and Lowry's prime rib served from their rolling silver carts.

The day Randy sent this pic, I had a veggie hot dog for lunch and the girls declared their grilled cheese burnt and inedible. Sigh.
Posted by Cindy Fey at 4:13 PM 2 comments:

Across Lake Michigan in Two and a Half Hours 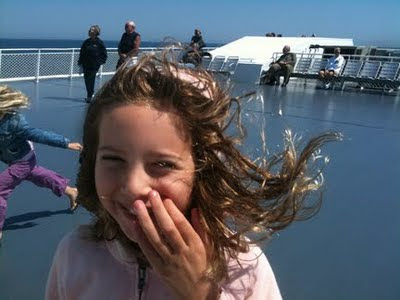 Yesterday we arrived home from a ten day vaca in west Michigan. Wanting to avoid the soul-sucking experience of stop and go traffic heading west through Indiana and hoping to give the girls an adventure, I booked space on the car ferry from Muskegon to Milwaukee. The trip turned out to be a blast.

Muskegon has seen better days -- we passed abandoned factories with broken windows and chased tumbleweeds through an empty downtown at rush hour Monday night and 9:00 on Tuesday morning. But the sunset over the inland lake adjacent to downtown was gorgeous, we found a decent hotel (Corporate-Victorian, if you can imagine that) with a nice restaurant next door (Thai sweet potato chowder) and our ferry passed a gorgeous beach state park on the way out of the harbor. From the sundeck we waved to fishermen and kids on the shore. A little tension when a fishing boat took its sweet time getting out of our way and another Bozo decided to cross our bow.

"This is heaven!" said my excited six year old when we climbed from the car deck to the passenger lounge with its big windows, comfy seats, snack bar, movie screens and decorative silk flowers. The girls played with a fashion design game I'd saved until the last day and narrated to me the plot points of Rango playing silently over our heads. We jumped up from time to time to check out the maps on the wall (Lake Michigan has depths over 900 feet!) and brave the wind on the sun deck. Thirty-four knots is forty miles per hour but feels faster. "Open your jacket and the wind will pick you up like a sail," I told the girls and half believed myself. 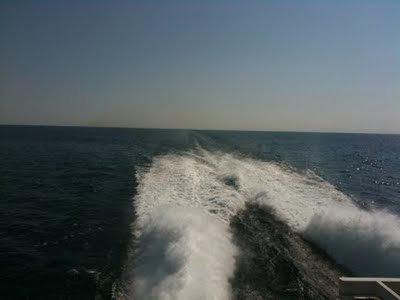 Amazing wake. Serene blue wavelets as far as we could see. In what felt like moments, a dreamy Milwaukee appeared in a pastel haze under a cloudbank.

Chicago has gots to get one of these things! It's the only way to fly! 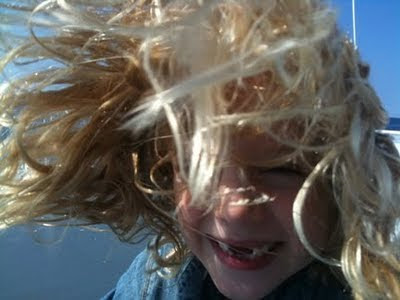 Nora lost her second front tooth the day before.
Posted by Cindy Fey at 7:12 PM 1 comment:

Three films by three guys traveling the world, finding all kinds of beauty and inspiring us to Move, Eat and Learn. (Like we need any inspiration to eat. Just make that Move, Learn and Drool.)

NSFWUYEAO (Not safe for work unless you're employed at a cool post-production company.)

So....this is how my husband's company celebrates its fifteenth year.


And the big reveal - A hooked rug depicting the five partners as, well, I'm not quite sure. Greek gods? Roman senators? Philosophers? Fallen angels? And Craig Leffel as a cupid/cherub/baby Jesus? Make of it what you will. But obviously a labor of love. 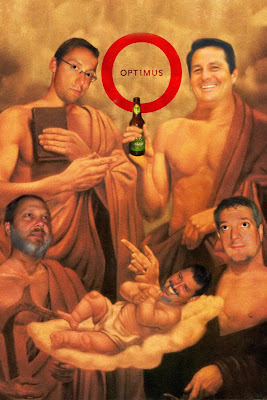 Rock on, Optimites! Keep on Truckin'!

Chris Knox - Not Given Lightly

I'd love to save this for Valentine's Day or my dear husband's birthday, but I can't wait to share it. One of the greatest love songs ever.
Posted by Cindy Fey at 3:32 PM 1 comment:

Free Tickets to The Adventures of Pinocchio! 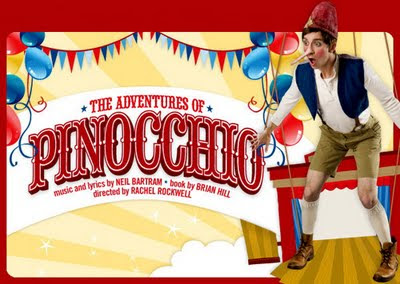 The Chicago Shakespeare Theater's production of The Adventures of Pinocchio is a warm and wonderful show for kids and adults. We took our girls last weekend along with their Aunt Rebecca, Uncle Dave and cousins Jess and Dylan from Florida. Our entire crew was charmed by the funny jokes, whirlwind dances, sweet puppets and magical stagecraft. The music is complex and interesting and the story has been made fresh with new ways of entering one of your favorite old stories. You won't want to miss the transformation of the naughty boys into donkeys (my girls' favorite part) or the charming thief pair of Fox and Cat.

And you can see the show for free tomorrow! Call the box office at (312) 595-5600 and mention the promo code "FRIENDS" for up to six free tickets at the 2:00 show on Thursday, August 3. Did I mention that's tomorrow? So you need to act fast.

You're welcome! Enjoy!
Posted by Cindy Fey at 10:12 AM No comments: