The longest days of the year and we're near enough to the solstice to feel the light again, to feel the energy that floods me this time of year, wakes me curious and ready at dawn, makes everything easier, spurs me to make plans, returns my equilibrium, has me considering the beautiful name April, May and June for my next three children, ha ha!

I've missed you, Dear Reader. Forgive my absence; it was a long and busy winter. I really wanted to tell you all about working with the freshman and our February Girl Scout troop trip to Wisconsin and my solo trip to Philadelphia to care for my dear little grand-niece Caroline, but there was so so much to read to keep up with the freshmen and their Lit Circles and many many (almost too many) scout leader fires to put out emails to compose and you just know how life gets away from you when you have two jobs and two Scout troops and two girls to raise. 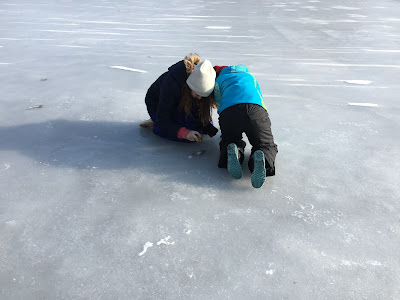 But I must tell you this: When we arrived at Camp Juniper Knoll, the snow was still thick and untouched under the pine trees. Back home in Wilmette we had only a few patches left, but East Troy, Wisconsin gave us plenty of the white stuff to paint with colored water from spray bottles and if some of those spray bottle were held at crotch level and if Nora some girl wanted to laugh like crazy as she sprayed her name in the snow, then we'll just leave it at that. The air was a balmy 30 degrees, all the girls were dressed for the weather and we were off to a fun start.

"You might need to slide down the hill on your butts" said the camp director as she sent us down to the shore of Pleasant Lake.  No "might" about it; the steep path was solid ice and walking upright was impossible. We sat on our snow pants and slid, whee, like a band of inverted penguins on our butts, twelve girls and two leaders, through the woods  and down, down to the rocky lakefront.

The lake was frozen solid. Ice fisherman had built huts and parked trucks off in the distance. The camp managers had set up a propane cooking stove and melted sweetly scented wax in two aluminum pots. We stepped gingerly onto the lake and ooed and ahed at the layers we could see in the ice, 18 inches thick. The camp directors took turns bravely (so bravely!) holding a piece of sharp pointed metal, a railroad spike? as the girls hammered it into the ice with a mallet. No smooshed fingers, amazingly. The girls found sticks on the shore and wrapped thick pieces of string around them with twelve inches of string left hanging which they suspended over the holes as the directors poured the wax. Have you guessed yet? YES, ice candles! We watched in fascination as the steamy popping wax turned quickly opaque, first at the edges, then slowly to the center. Some girls had found tiny shells on the beach or evergreen needles to toss in the hole with the wax and if the results were not so much uniform columns as lumpy shallow cones, we were still thrilled and enchanted to pull them up out of the ice. 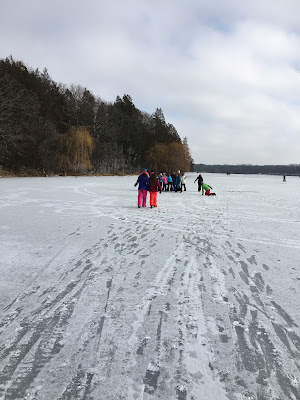