Remember the weeks of shock after 9/11 when we felt like we were living in a disaster movie? The fireball images on TV looked like the work of computer graphics and that fiction was easier for our stunned minds to accept than the reality that the damage and death were real, forged by real people, not comic book super villains. 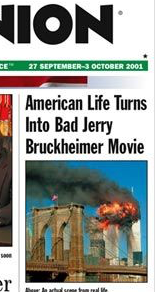 I'm having flashbacks to that same floaty sense of unreality now only the movie this time is an international spy thriller mashed up with a wicked Wag the Dog/Dr. Strangelove satire about craven villains and sycophant aides who whisper mendacious scripts in bought politician's ears.


"It's just like Veep!" I yelled at Randy when the Orin Hatch's staffer coached his vapid response to Claire McCaskill.


This sense of unreality, of floating, unsure what the next morning's news will bring and where we are headed is undoing me. I've had a headache since November 8 and a heartache to match.

My fantasies are of escape, escape but where, really, is the deepest wood, the farthest mountain cave, the tiniest desert island?

Mia slipped a penny into the Highlander's CD player to see what would happen and I can't really blame her toddler-like curious impulse, it even gives me a blast of nostalgia for those innocent days of pushing the boundaries of the physical world around her so even though she is fourteen I can't scold her just wish we could turn the car up-side-down to shake the coin out.

Because that little penny has locked in the six CDs I had in the player and those six are now our only choices. I only listen to music, really, in the car so these six random picks from my CD collection have turned out to be my desert island albums, the unplanned answer to what would you listen to forever if you had to pick and it turns out they are a pretty perfect unplanned collection. Would I have chosen these if I knew they would be my last choice? Possibly.

1. Beyonce's Lemonade, which would have made the list if I had any forethought or not, even though I skip the C/W "Daddy Lessons" and most of the slow moments. But "Hold Up"/"Don't Hurt Yourself"/"Sorry" make such a searing trio of pure female rage and goddess power that Wonder Woman herself would be proud. And because "Freedom's" fuzzy 60's throwback guitars and swampy organ and "All Night's" soaring background vocals and implied forgiveness.

4. The soundtrack to the Coen brothers' Inside Llewyn Davis, a movie which grows and grows in my mind the more I think about it. The slow burn of building desperation as the struggling folk singer of the title hustles his way to another gig, another place to lay his head for the night. The Gomer Pyle soldier with the voice of an angel who will surely soon be Viet Nam cannon fodder. Lovely Carey Mulligan's harshness which first seemed oddly out of place but now works in the context of a piece about motherhood and fatherhood's incompatability. How the threads of fatherhood fear and responsibility repugnance and vulnerability weave together with AND WITHIN the gorgeous music until it's Eraserhead meets Bound for Glory. Plus an indelible cat.

5. Inside Dave Van Ronk, a double album on one disc by the actual New York folk singer inspiration for the Coen Bros. film. The real singer may not have been the hapless asshole that Llewyn is, but his music, oh jeez, what a collection, funny songs and the dreamiest paean to cocaine that I've heard since Eric Clapton and beautiful violent ballads of dead children, abandoned children, a tortured and murdered ship's apprentice and all in his unforgettable raspy voice.

6. Joanna Newsome's latest album Divers. Newsome will always make my list but given a choice, I may have gone with an earlier, folkier album like The Milk-Eyed Mender yet this new one is a thing of wonder too, just witness that rising groove and climax telling the strange history of the fantasy land of Sapokanikan, her most propulsive song since "Good Intentions Paving Company."  The girls and Randy can't take her high soprano or odd twists of melody so this album is destined to be heard only when I'm alone.

Another story from Peter Matthiessen's Snow Leopard, probably my favorite:

The Lama of the Crystal Monastery appears to be a very happy man, and yet I wonder how he feels about his isolation in the silences of Tsakang, which he has not left in eight years now and, because of his legs, may never leave again. Since Jang-bu seems uncomfortable with the Lama or with himself or perhaps with us, I tell him not to inquire on this point if it seems to him impertinent, but after a moment Jang-bu does so. And this holy man of great directness and simplicity, big white teeth shining, laughs out loud in an infectious way at Jang-bu's question. Indicating his twisted legs without a trace of self-pity or bitterness, as if they belonged to all of us, he casts his arms wide to the sky and the snow mountains, the high sun and dancing sheep, and cries, "Of course I am happy her! It's wonderful! Especially when I have no choice!

Mike and Christina come over on Saturday night and after steaks and trout stuffed with herbs and overdone salmon with a fantastic mustard-honey-mayo-dill sauce, Randy brings up his dusty guitar and amp from the basement for Mike and I grab Nora's sticks and we jam to shouty, sloppy versions of "House of the Rising Sun" and "Bohemian Rhapsody" and "Dream On." I'm just slamming the melody on the drums or matching the rhythm of any guitar riff I remember and throwing in some nonsense fills with a cymbal crash accent here and there but god it feels good to bang away and wail SEWED MY OLD BLUE JEEEEEEEEEEANS! and after ten o'clock, bring it down for the sake of our poor neighbors and croon a little misremembered "Pennies from Heaven" together. The overhead light shone down on us at the dining room table, laughing at the Instagram videos Mia just shot and labeled "Help Me" and "My parents are drunk" although I was sober as a judge, the table an island of light in the darkness.