That's not what I actually wrote; it was more succinct, but you get the idea.

Funny, you would think it was Teacher Hat v. Cindy Hat, or Teacher Blog v. Cindy Blog. As if one is a role and one is truly me. Nope. The teaching work feels elementally vital right now, feels like a true exploration of self, feels like me.

If I Had Time Enough

Had I time enough, I would write an Ingalls Wilder styled post about my beautiful commencement to summer when I drove down to Plainfield in June to pick wild asparagus with dear cousin Becky. I would add some Garth Williams style charcoal line drawings of the flora beside the creek where Becky and Brad, her oldest son of three now grown into men, taught me to find the asparagus spears. I would describe how happy the dogs were, brushing down through the thick grass that lined the steep creek bank, splashing across the shallow stream and bounding back up the other bank, over and over, their mouths in open happy panting smiles. I would describe how patiently Becky and Brad pointed out to me the overgrown asparagus ferns with their Martian branches and helped me distinguish the older brown and wispy fallen dried ferns that may signal where baby shoots could be found underneath. I would write about how happy I was to be with Becky, the daughter of my mother's sister, my country cousin, the girl I played with when we were children, then separated from in the 80's when she had children and I had college, then reunited with when I moved back to Chicago and keep reuniting every year we get together and realize never really were separated. Her mother was my mother's only sibling and her mother tried to take me and my siblings after the plane crash in '69, but my father's family fought her in polite and vicious letters and with lawyers and Aunt Joan resigned. 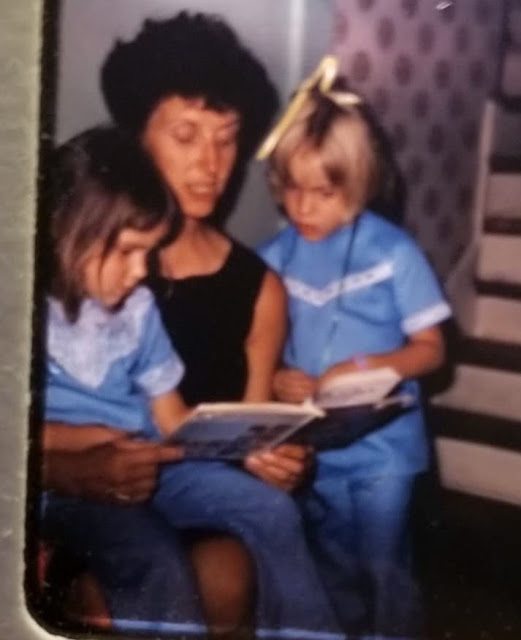 Aunt Joan reading to Nancy and me

After we had gathered pounds of spears by the creek, we backed up the bumpy dirt track out of the cornfield and back past a house on the main road that Brad had pointed out to me on the way out.

"See that house? The front yard is full of asparagus. See there? There? And there's more," Brad had said when we first passed the house. "I think that's a rental house. Last year I pulled in the driveway and and the guy comes out with a rifle."

I saw a mid-century ranch set way back on its corn field acreage, with a unpaved driveway and an overgrown yard. I hadn't learned how to spot the ferns yet so I couldn't see what Brad was seeing.

On the way back from the creek, I've found the eye. I can see gorgeous low spears and overgrown ferns.

"Let's pull over and I'll do the commando crawl through the grass!" I say, all excited at my new skill.

If I had time, I would give you the pickling recipe with ginger that I used to put up the asparagus spears in tall glass jars. I would tell you about the quick visit we made to Aunt Joan and how it hurt to not be able to hug her and how awkward it felt, that early in the summer, to wear a mask. I would tell you how I came back to her place last Saturday, this time with the girls and Nora's friend Billa, this time with masks that felt fine on the face and the girls brightening up Joan's face with a coordinated cheer. 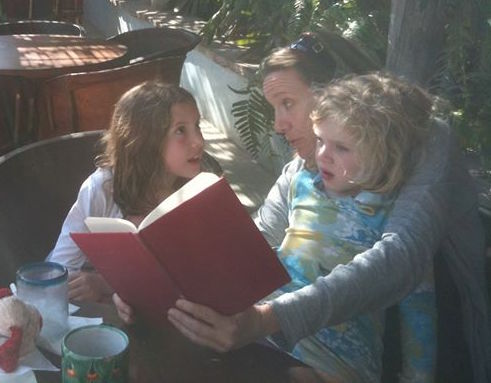 Mia, Nora and me at La Esquina in Todos Santos with Ted Hughes' The Iron Giant

I am putting away the dishes as I sneak glances over at her working on the floor of the living room.
The dishes I handle include pieces of her pottery,
a cream colored spoon rest,
small shallow bowls.
Saucers for collecting the chopped aromatics before they go in the pan.
Her ceramics are smooth with shiny fired glaze on top,
rough and unglazed underneath.
Warm earth-tone colors,
precious utility.

Mia's working in black and white right now,
clipping out images from my old postcards of older photographs:
a Bruce Weber couple on a motorboat,
Billie Holiday caught by a flashbulb while looking in a mirror,
Edith Piaf mid-laugh.
She is crafting a collage that will eventually make its way to the mailbox
and then to her art teacher.
A quick fun assignment,
due in twenty-five minutes.


When she was working her way out of my body,
I shook her father awake,
then handed him a paper that read
"Don't ask questions."

It was a page of advice to birth helpers so as not to distract the laboring woman.
No surprise,
he let loose an urgent string of queries.


Now I am doing my best to keep silent,
let her work,
don't distract,
although I want to get inside her brain right now,
find the secret to her process,


"How does your doubt go away?
How can you work so fast,
so free?" 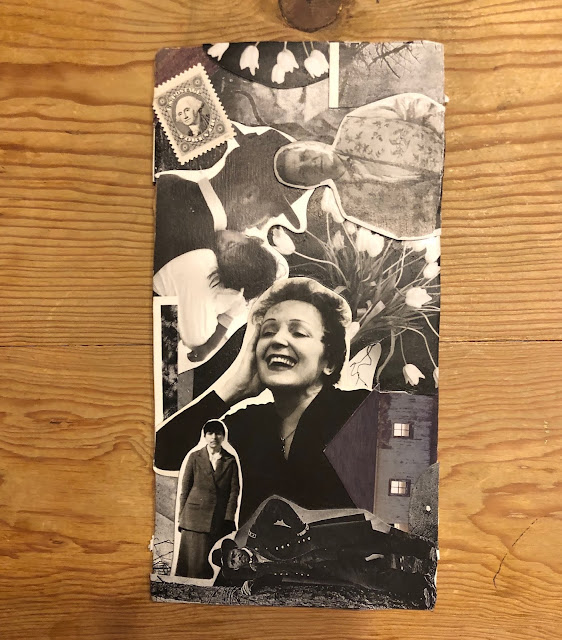 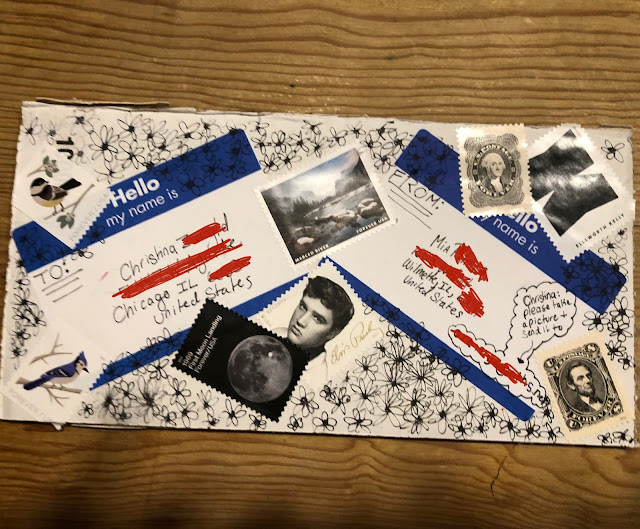 I Will Never Think About Them The Same Way Again

Rental cars.
Bus straps.
The cord you pull to tell the bus driver your stop is coming up.
Subway poles.

The work refrigerator where you store your lunch.
Copy machines.
Drawer handles.
Pencils.
The pencil sharpeners hung on the wall of every classroom.
First day of school handouts.
Keyboards.
Faucets.

The edge of the Pepsi can.
Birthday candles, or rather, what we do to lit ones.
Birthday cake.
Bowls of candy.
Halloween.

March 27, 2020
Siri, Google "Etiquette tips for the children of murderers."

April 1, 2020
Nobody wants to hear the details of your dream.
Nobody.
Unless you have a two point set up and punchline,
I don't want to listen to your boring narrative that thrills only you.
So I will soft-focus my ears and
watch you instead,
watch you instead of listen to you,
watch how excited and amazed you are about
this movie you invented while you weren't even trying,
this movie you are intrigued and puzzled and fascinated by,
and maybe even a little in love with.
You made something,
or rather, your unconscious did
and it is still a thrill.

April 4, 2020
I cry later.
Families who eat casseroles of cortisol know what I mean.
Shock and awe are our way,
so do the next thing,
move to help or
inform or
research or
call or
transfer funds or
Google interventions or
reach out or
call Western Union or
notify the funeral home.

No time for feeling. Not now. Not yet.
Posted by Cindy Fey at 9:31 PM No comments:

Thank you, black squirrel,
for the glimpse of your quicksilver curves,
your shiny coat and deft digging
in my planter box.

You're eating the old bulbs I planted yesterday
but please
feel my welcome to them.

my jolt of delight from your
feline back-foot scratching
is all the liveliness of spring
I need.
Posted by Cindy Fey at 9:27 PM No comments: