You know that moment when you rediscover the french fry that you lost an hour ago in the car while driving the little 'un to an appointment because you've got to feed the kids every day, right? Even though you're sure you fed them yesterday? And when you have finished the meeting and are standing to go and that dear little lost fry decides to take that perfect moment to take leave out of some cozy corner of your scarf or some scenic byway of your coat and fly out and land onto the conference table before you? And in that moment when the kind new acquaintances with whom you are meeting decide not to acknowledge your reunion, do you dare admit to yourself the impulse to put that fry into your mouth? No, no, you do not, that would be gross and ridiculous, so you grab it and put it, where? where? in your POCKET and finish the paperwork and thank the kind pair who are still looking you right in the eye and have said nothing although sometimes I am the sort to cry out to my daughter's chagrin, "Oh look! My fry!" But not tonight.
Posted by Cindy Fey at 7:10 PM No comments:

Over lunch with Uncle Sid earlier in the fall, such a relief to be able to talk about Aunt Ruth and how hard my visit was in September. He said he had been talking with his son about the whole situation and my cousin said, rightly, "What a disaster."

A shifting of perception that has carried me through so much. Non-judgmental, detached and concrete.

On nights where sleep did not return, I called back to those words, and also those of my friend Kerry consoling me gently, but insistent, "There are some problems that are unsolveable." The words help.

To sleep I also tried breathing out longer than I breath in, counting up to four as I do so, or counting backwards by seven from a random three digit number, or picturing myself in a small cave or in a more comfortable bed, picturing a long walk down a gentle stair or hill or wooded path, breathing slowly through the syllables "Om. Man. Ee. Pad. Me. Hum," picturing a giant light switch that I turn off, letting go of words and letting only pictures unspool in my head.

My doctor laughed as I reeled off this list. She offered magnesium, calcium, vitamin D, shots of b12 and okayed my St. John's Wort idea. Sure, they may be helping, can't hurt, right? and I'm a strong believer in the benefits of placebos.

There's still so much to sing and dance about here. Dear Mia caught the three of us girls on her phone on a typical night this tough fall: Post Modern Jukebox's version of "The Heart Will Go On" had hooked me up in the beat and the sweet balm of "you are safe in my heart and my heart will go on" and even though the house was at sixes and sevens for the kitchen reno/first floor painting/asbestos remediation, plastic sheeting everywhere, I still had to jump out of my seat and shimmy because my heart will go on and on and I still get some time with these two amazing girl people. We were all chewing carrots and they were playing on their phones; Nora, thirteen and unimpressed with my moves, says, "I am moving out of this house."

Hope springs eternal and late December (yay, Christmas is done!) and fresh snow and early January (yay! friendly kale and glistening grapefruit!) and the prospect of spring all conspire to nurture that persevering light. Happy New Year and best of luck, dear reader, thanks for being here.

Just one more thing: On Christmas Eve, we went over to Mike and Christina's, peppermint fudge, candied sweet potatoes, arugula-pomagranate-goat cheese salad (it's red, green and white, you see), and Pavlova in tow. Mike complimented the last with, "This is like the kind of dessert they would serve at a Renaissance table" and Steve chimed in, "With peacocks on the table," and I was so pleased though in Midwest fashion, you must admit the flaws and I had to tell how the egg whites mysteriously took an hour to whip to stiff peaks rather than the 8-10 minutes predicted by the recipe and how I had slow-baked the meringue to a gorgeous white snowbank but then I forgot it was in the oven where it had dried overnight and when I turned on the heat for the sweet potatoes, the snowbank cracked and browned a bit, like a toasted marshmallow. But that was just modesty because the cranberry curd was a dream, the whipped cream held on the way over to their house and the blood orange supremes were so pretty. No gooseberries like in the picture, but some halved kumquats might have been cool. Next time. 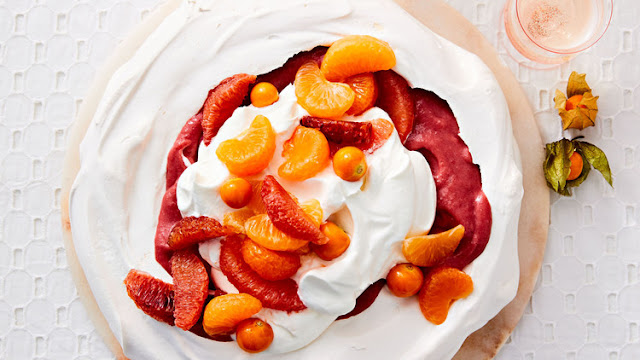 I was so grateful for Serena and Brent's visit, I was, although we have all changed and I do feel the need to keep apologizing for my bitchiness over our last visit but I don't and then there's more bitchiness I don't apologize for but they stayed, Brent and Serena chose to stay here with us, nestled in our cluster of the couches, next to our plywood island, even though we had got the condo for them, they would rather have been with us and our mess. That made me happy and made me feel forgiven. I showed them how my extroverted introversion makes me feel after a few hours with people, and I fell to the floor and squeezed between the ottoman and the couch, tucking in my head as a rabbit in its hole may, if the shy and exhausted rabbit were moved and able to protect its neck duck-and-cover style.

And now it's the long break with days of baking and movies and working out and then long nights of rest. Nora is working hours at Kinko's making photocopies of a journalist's journals and Mia plays videogames until I cajole her to read a few more pages of The Help and The Color Purple. She'll take three days of drawing and painting at the Evanston Art Center later this week while Nora tries some tennis. Each day flies by but there is still that great pleasure at seeing how many are left. I am keeping this Christmas break feeling for the years ahead, too. It's precious, these few years we have left together before the girls go off to school. And these precious few years of work left, too. Look at what fun we've had! And look what riches we have left before us to enjoy!