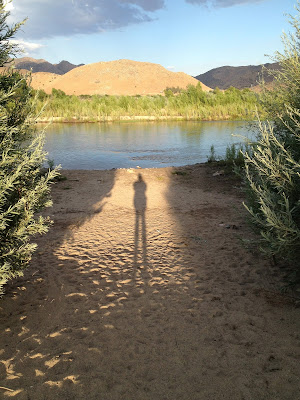 I took my old paperback copy of Peter Matthiessen's The Snow Leopard with me to California, my go-to book in times of stress and trouble and yes, joy, too. Its account of mountain trekking, nature observation in the Himalaya of Nepal and the tenets of Zen Buddhism helped me in the aftermath of our friend Jerry Smith's suicide last year and it helped me again on this challenge to go see my dear brother.

First stop, LA. To offset my guilt for this solo trip that mom-guilt colors as an indulgence, I take the $1 bus from LAX to Venice and walk the rest of the way to my hotel. One dollar, people! So what if I need to ask a bunch of people where to catch it and take a shuttle and then stand on the side of the road while the sun is setting and I'm not sure I'm in the right place? The bus cost one dollar!

The next morning on my rented bike from Venice Beach to Will Rogers Beach, the heat rose up in waves over the warm sand but the wind chill off the ocean cooled my skin, a delicious sensation. I could ride all day. 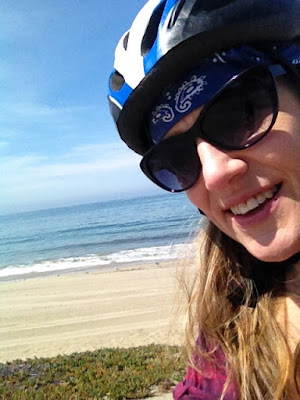 At Temescal Gateway Park in Pacific Palisades, I climbed a log across a dry creek, scrambled under low bushes on my hands and knees up a steep hillside, and met people running on the trail that had me huffing and puffing and stopping every few minutes to rest. "Is this a loop?" I asked every walker I met and yes, yes, it was, up to epic views of the city and the coastline, then down, down to a dry waterfall, oaks and butterflies, tiny lizards and sketching art day camp kids.

The ocean was my reward, a soup of seaweed, long brown strands and stringy red puffballs. I laughed with the family next to me in the surf, laughed at the intoxicating sensation of surging cold water on hot skin.

The bike ride, the canyon hike, a walk along the charming Venice canals and a trip to the Getty were all for me. My second day in LA, I took the bus (did I mention it's only a dollar?) and walked to MPG, a rental car company with an all green fleet and picked up my hybrid Speck for the drive to Bakersfield.

There may have been times I've taken a break from the kids and I'm running out the door and nearly laughing with relief once I'm in car but this time... six days felt long. It was hard but I knew the girls were with their dad and aunt and uncle and cousins and every time I felt out of place I would remember to breathe and think, "This is exactly where I am supposed to be right now." It helped.


I met my brother for dinner on Tuesday. I was so happy to see him; he'd just got a haircut and he was all neat in his work clothes. He looked healthy. "This is my brother!" I told the hostess. "We haven't seen each other in a couple of years!" At the Getty I'd found a gift for him, a simple compass on a chain. When I took it out of my bag, he said, "No Cindy, you keep that," and pulled out his phone to show me an app with super precise longitude and latitude and something like the density or chemical makeup of the ground under the California Pizza Kitchen we were sitting in, I'm not sure. We laughed at how cool it was.

He's saving for retirement. I'm proud of him.

I drove the next day to Sequoia National Park and spent the day hiking, navigating hairpin turns at 10 mph, breathing deep the spicy clean air given off by the largest trees on earth, awestruck, moved, grateful, unable to stop grinning. 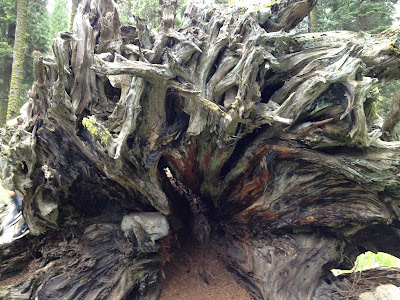 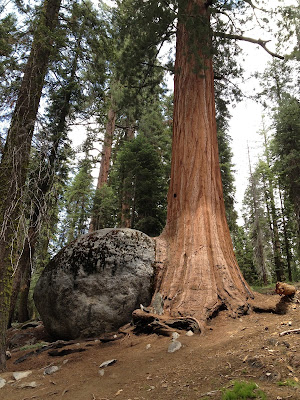 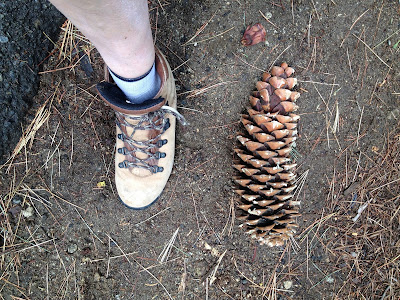 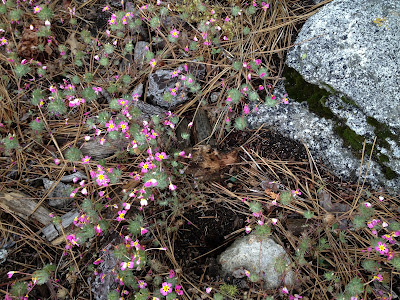 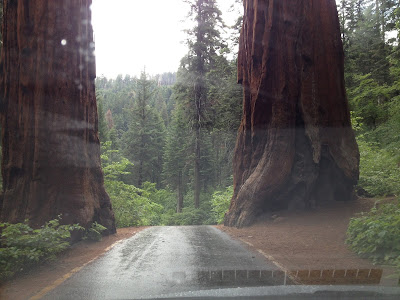 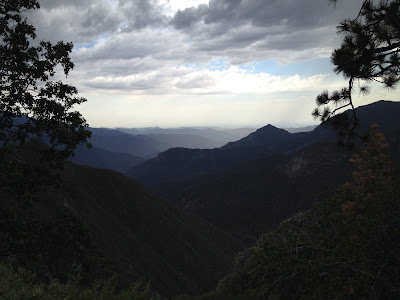 The sun broke out on my way out of the park and down into the Central Valley via 198. Gold sun-baked hillsides above deep green lemon groves. 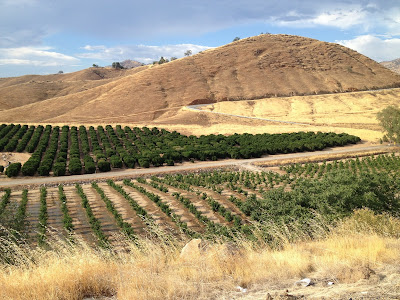 And then the turn off to go back into the Sierra Nevada to my brother's tiny town: 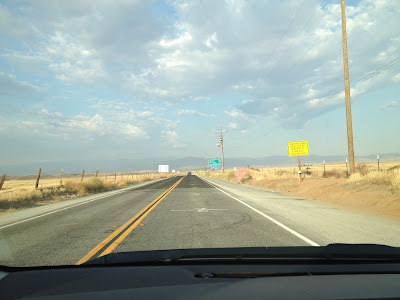 Another breathtaking drive to Lake Isabella at twilight via 155 through Woody. My brother's house sits on the narrow terrace of a steep hillside. He has cut a row of even stumps to line the dropoff at the edge of the driveway and fashioned a homemade table under the trees. He has two dogs, a black Lab and a German Shepard. They are friendly and gentle omega dogs, refusing to go with me for a walk, standing firm next to my alpha brother no matter how he urges them to follow me. I check in to a tiny and cute motor lodge at the bottom of the hill. The office guy sees I like tea and has his daughter leave me Sleepytime teabags to steep in my room.

The mountains are beautiful up here. John Ford shot scenes for Stagecoach right down the street at Tillie Creek, I am freaked to discover at the tiny historical society in the touristy town of Kernville. I spend the day hiking in the Sequoia National Forest. Another day of wonder. I leave the trail and follow the long lines of fallen trees up a hill: I find a flake of fallen tree bark that could be a flattened infant griffon. Centered between a fallen yet still green-needled fir branch and the same branch now brown and dead is a blue jay feather.

I've wondered before, in Montana, how it is that our cruel natural world can transform into the most hospitable of environments, every stone a step for a boot, every fallen log a resting place. I know there is no design, no benefit for anything but ourselves in these woods, but this reforming of the world into a welcoming place happens nevertheless. Thank you, tree; thank you, soft yielding mulch under my feet.

And yet, and yet, as I am wary of the patterns and purposes that religion and my brother find in randomness and coincidences, I know that our minds' work is to create meaning, and nature abhors a vacuum of sense so their organizing efforts is a kind of natural occurrence too.

On the drive back down the twisty Kern River Canyon, I stop to soak my happy toes in fast flowing river water that is both sparkling and brown. This is snowmelt from the unseen Mount Whitney, highest peak in the contiguous U.S., why is it not freezing? It feels so perfect on my hot feet and they are soft after the splashing. 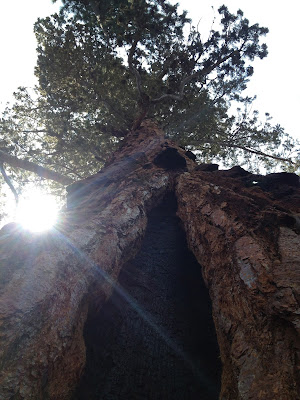 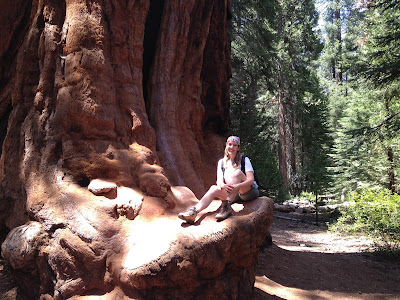 On Saturday, we took a long drive around Lake Isabella. My brother had me pull the car over to show me a strange old stone box half buried in the hillside. The door was long gone but you could see where the hinges had been and there was a little metal shelf inside. A mystery, my brother thought it might have been a storage place for gold from the area mines. He had brought along his pickax and other prospecting tools and hacked out shiny rocks from the glittering veins of mica in the cliffs. The rocks fell away in thin sheets. The shine was beautiful in the bright California mountain sunshine. "I've got the gold rush!" I said and laughed. I did. It really was thrilling.

We had breakfast at the tiny regional airport next to the lake with a campground and little cafe.

"There's one of the type of plane our parents died in," he says as we're crossing the parking lot. It's a small craft, two windows on each side, the back ones hung with a diminutive set of curtains. Hard to believe you could fit four passengers and enough luggage for a week in the Bahamas.

"A Mooney executive. You can recognize it by the distinct tail. It looks like it was put on backwards." And it does. We stare for a moment, clear-eyed, interested. Such is the strange way you have of looking at the world when there's a loss so big in your life that you can't remember a time without the hole in your heart. 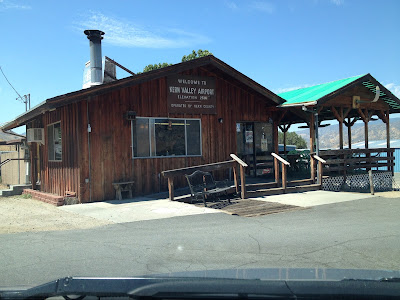 The waitress who brings us our oatmeal with blueberries refills coffee for the other tables and answers a squawk from the walkie talkie behind the counter. It's a pilot waiting to take off and she gives the all clear. "I check out the campsites, too," she laughs. "I wear a lot of hats around here." 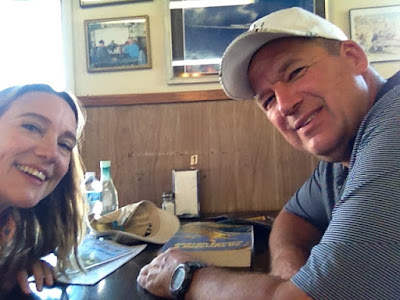 We were both tired and irritated by the afternoon so I took a inner tube ride down some fun and mild rapids on the Kern. Happy Fourth of July parties spray me with water guns but it only feels cool and good. I still have not had enough of this water so on the way back to the motel, I pull off on an unmarked road and bushwack down to the riverside. I've got my new river shoes on and I wade into the cool current.

The secret of the mountains is that the mountains simply exist, as I do myself; the mountains exist simply, which I do not. The mountains have no "meaning," they are meaning; the mountains are. The sun is round. I ring with life, and the mountains ring, and when I can hear it, there is a ringing that we share. I understand all this, not in my mind but in my heart, knowing how meaningless it is to try to capture what cannot be expressed, knowing that mere words will remain when I read it all again, another day.

On Sunday I hike up the hill to my brother's house. The dogs greet me silently. Ron is sleeping to the sound of a portable fan, but he wakes and we say goodbye with love.
Posted by Cindy Fey at 4:04 PM No comments: