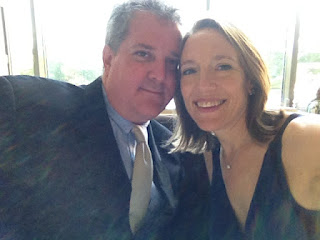 The plan was no gifts, although he surprised me with a gorgeous yellow and red bouquet yesterday and I surprised him with a towncar and driver for our progressive dinner.

"Five years is tin, ten years is bronze and twelve is gasoline," I reminded him. Not that I couldn't have driven since I only indulged in two sips of his sweet dessert wine, but I was so giddy with the night I felt a little drunk. And it was a night for reveling in the countless gifts we have already accumulated in our years together - especially every day we have had with those two amazing children.

Not that our progression took us very far - instead of across town, we progressed from astounded at Spaggia's raw scallop with sea urchin (delicious orange goo that tastes of the sea) and finger lime (a New Zealand fruit formed in tiny crunchy bits of pulp that burst in your mouth like citrus caviar) to delighted (a perfect wild salmon sitting on a bed of mustard horseradish cream sauce and topped with pickled cucumber and a thin sliver of toasted pumpernickel that cleverly acts like the skin) to sated.

So the nightcap idea was abandoned and the trip to Mindy Segal's Hot Chocolate may have been a bit much, but it did make for the best moment of the night when we started talking to the big multi-generation birthday party next to our table and found out the birthday girl was born on the day of our wedding. Her name was Isabella and her grandmother wished us as many happy years as she and her husband of fifty had enjoyed. And boy did she look good for a woman married fifty years! Five of her nine grandchildren sat at the long table, a little one brushing the birthday girl's long hair with loving strokes.

Sometimes I feel like I'm tempting fate when I talk with Randy about my hopes for the girls and their futures. Such is the legacy of knowing loss too early and too well. But I saw two beautiful young women in short dresses and braids at the table next to ours at Spaggia and I dared to imagine our Mia and Nora for a moment, tall and capable, and the thought almost took my breath away.

Links to this post
Email ThisBlogThis!Share to TwitterShare to FacebookShare to Pinterest
Yesterday afternoon I rode my bike up the street in the rain to pick up Nora from violin lessons. The sun was shining from the west. I pedalled through falling drops of light.
Posted by Cindy Fey at 8:45 AM No comments:

Sometimes Metaphor Up and Slaps Me In The Face

The last time we were here at Fox Lake we were sitting on the porch, watching the water, waiting for our guests to arrive, two little kids and their uncle who is taking care of them since their widowed dad died this spring.

Mia said, "Look at the ducklings!" and there was a tight cluster of them, maybe five or six, paddling away from the shore, bobbing like corks on what looked like heavier waves than they could handle.

"Where's their Mama?" I wondered and my heart sank, but Mia just cooed at how cute they were and how well they were doing, sticking together.


This hot week, a crowd of family and friends joined us at the lake and the six kids in attendance, my girls and the ducklings and a fifth grade boy and his newly teen sister, are all of the ages when riddles and brain teasers are fascinating (1. "What has three faces and eight legs?") and funny (2. "What's long, brown and sticky?")

The Riddle of Sphinx got thrown out there, of course, and (3.) the victim found in a locked room lying in a puddle of water and broken glass.

"I've got one!" I shouted and my friend Kate said, "The doctor was his mother," which freaked me out because it was the right answer and made us laugh.

After a few rounds, the kids started trying out their own compositions. (5. Mia's: "What is gold and floats?") Ruthie, the teenager, wore a grin wide open with laughter as she listened to Nora try to make her nonsense work. (6. "A man is sick and he needs to take a pill and he looks down and the floor is moving. How is this happening?")

Meanwhile the grownups who haven't seen each other in weeks or months or years or even ever were catching up and Ehran (old friend and father of the two funny kids) and Elle (Floridian friend of my father-in-law) bonded over recalling the fun of the movie The Best Exotic Marigold Hotel.

"Everything works out in the end," they quoted together. "And if it doesn't work out, it's not the end!"

Elle has a pretty laugh, a musical North Carolina accent and a sweet, frequent smile. She and my father-in-law have been together for three years, happy years it seems. This is the first time the girls have met her. Nora gave her a hug before learning her name.

Randy and I had been all tense about the girls being confused by Elle's presence while Grandma stays back in Florida but when Nora accidentally referred to her once as "Grandma" and I said, "she's not your grandma," I learned once again that children adapt more quickly than adults and I am capable of making my own worries come true.

We had some quiet time together before most of the crowd arrived, just the four of us and Elle and Grandpa, and over a panini lunch on the deck, Mia told her version of the riddle we call The Two Envelopes.

"The tailor did not trust the king so that night he snuck back into the castle and hid behind a curtain. He heard the king say to his advisor, 'I wrote You must die on both papers!'

"So what will the tailor do? He could run away, but he really wants to marry the princess. He could reveal the king's plot, but then he would shame him and have an enemy for a father-in-law.

"The tailor thinks of a solution. He finds a way to live and marry the princess and not make a fool or an enemy of the king. What does he do?" (7.)

I love this story so much and I love how Mia tells it, with her voice getting whispery and conspiratorial at the end. Bob and Elle, sitting next to each other, laughed at the clever solution, then I remembered another variation of her story and launched into it, thinking nothing beyond that the girls are getting smart and old enough to tolerate some solutionless ambiguity.

My story was "The Lady and the Tiger" and this time the choice is between two doors, one with a hungry tiger behind it, the other hiding a different girl who will become the suitor's bride. The princess has changed too, into a fierce Roman instead of a flimsy and silent mannequin. She is the one who discovers the secret to which door is which and she is the one who secretly gestures to her lover which door he should open. And open it he does, without hesitation.

So which door is it? Does he marry another girl, leaving the jealous princess to suffer as she watches their happiness? Or does she send him to his death, a gruesome one, but not unlike others she has watched for sport in the Coliseum?

The story never gives you an answer. The girls begged for an ending, but I told them they had to decide for themselves. I don't know how much of their pleasure is curbed by the denial of a conclusion, but I did hear Mia retelling the story to Ruthie later, with relish.

At our lunch table, with Bob and Elle, I had been halfway through the story when the connections hit me. I was sitting across from the suitor and his new love. The deadly tiger in their story was loneliness and the door chosen turned out to reveal this other woman, kind and blameless.

I used to beat myself up for the stuff that comes out of my mouth. Not this time. I knew I was telling the princess's side of the story, and that might be painful, but I just kept going. Why not learn something from that "what did I talk myself into?" feeling, that raw and stripped feeling?

What would the girls' grandmother want for her husband? She could be fierce and fiery before the Alzheimer's took away much of her memory, and most of that fire was in the name of what she called love. Is what she wants even a question I can ask? I know what she needs, her own escape from the tiger's claws. But what she might have wanted in the end I will never know, could never know, but then again, this is not really the end, is it?

Answer key:
1. Two men riding a horse.
2. A stick.
3. The victim is a goldfish.
4. A coffin.
5. Goldfish, again.
6. The bed is moving.
7. The tailor comes to court the next morning, selects one of the envelopes and rips it up into tiny pieces. Then he says to the king, "What does the other one say?"
Posted by Cindy Fey at 8:39 AM No comments: 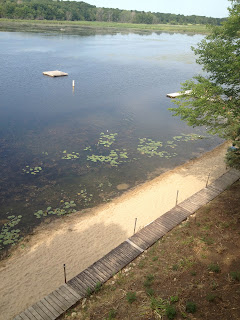 A boy in the water between the swim float and the dock says to me, "I need help." His face tilted to the sky and a sole of one foot are the only part of him breaking the surface of the water. I reach a toe down to the muddy bottom of Lake Wandawega but feel only a brush of weed and nothing. If I pull him to my neck, we'll sink, so I put my hand under his torso and push up with no more leverage than the kicking of my legs. His arms churn the water. I can feel his chest in my hand expanding with the work of his breathing as he plows toward the dock. I'm a water waiter, holding him up toward the air, paddling with my other arm, the effort too much to be able to give him any encouragement. He grabs the side of the dock, says, "thanks" and we go our separate ways toward more fun. Of all the dark-haired bare-chested boys I see running around the rest of our long summer day at camp, boys catching fish, flying on the rope swing, roasting marshmallows, sleeping on benches through The Parent Trap, I can't tell which is he.
Posted by Cindy Fey at 1:31 PM 2 comments: