Paintings by Holton Rower. Watching in full screen is recommended. Drippy trippy.
Posted by Cindy Fey at 11:05 AM 1 comment:

I have a new vision to help me through the winter days when the cloud cover is heavy and low and the extra minutes of light at the end of the day are not enough. As I go about my day, I imagine every drawer I pull open, every door, every book I crack, all reveal a surprise of brilliant light, kind and warm. I bathe in the brightness, my pupils go sore from the sudden contraction and I have to smile.
Posted by Cindy Fey at 1:57 PM No comments:

"Uck," I say. "Was one of them that guy who works at the ice cream store?"

Randy and I are talking Bill O'Reilly on the drive home and Nora asks, "Who's that?"

A couple of minutes later, she is dancing in her booster seat with a panicked grimace on her face. Our kindergartener has got Carole Lombard's white curls as well as her frenzy.

"Do you have to go to the bathroom, Nora?" asks Daddy.

"Okay, hold on, we'll find a place and pull over."

Randy and I are exchanging looks, then she adds, "You might have a pee pee dream!"

I stood behind the glass door this afternoon and watched little Nora as she waited for the kindergarten bus. Wrapped in snowsuit, boots, gloves and hat, she worked in the fresh snow, throwing handfuls into the air and catching them on her hatted head like confetti. She looked down the street for the late bus, then looked back to me to wave and catch one of mine, then got down to the business of play again. Big armful-sized blocks of snow were carried to her snowbank work table, icicles retrieved from the cherry tree and stuck in the top, (hair? a crown?) a stick from the maple stuck to Snow Buddha's side. Or perhaps he was a frozen King Triton, after the mermaid movie that we watched again this morning.

This morning the village's miniature snowplow cleared the sidewalk where Nora stands and I'm kind of sad, even with the glorious sky and sun that have followed Tuesday and Wednesday's SnowMyGod Snowmaggedon of 2011. Yesterday I had carved out a wandering path from our front walk to the corner where the bus drops off the kids. Now the way is straight and broad. My homemade version may have been no more wide than the narrow width of a snow shovel, but its leisurely curves and clumsy chunks showed the craftwoman's effort. Like a sculptor's tool marks in the clay. 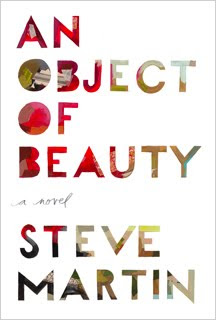 The last simile brought to you by Steve Martin's newest novel, An Object of Beauty, a lovely and lively tale of art dealers and collectors I'm reading set in the galleries and tony restaurants of Manhattan. Martin, whose memoir Born Standing Up I loved, describes the pre-millennium, pre-financial-crash art scene with the ease of an actual collector:

"Whether (the art of the '90's) was any good or not, the sheer amount of it -- to the dismay of cranky critics -- was redefining what art could be. Since the 1970's, art schools had shied away from teaching skills and concentrated on teaching thought. Yet this was the first time in conventional art history where no single movement dominated, no manifesto declared its superiority, and diversity bounced around like spilled marbles on concrete."

Martin's prose is chewy and delicious, well, until I hit the novel's 9/11 episode this morning. Stopped me dead in my tracks, and brought me back to the awful experience of reading the first half of Chris Cleave's Little Bee last summer. (At that novel's midpoint, Cleave puts three of his characters in a horrific scene so vicious and disturbing, every following action can't bear the weight of what horrors came before. I gave up when two lovers were arguing about his wife - how could we be expected to care about their petty squabbles after that unerasable image of the murder on the beach?)

An Object of Beauty hasn't lost me yet, just made me pause. I'll see if the ever-deft Martin can work his magic on the American tragedy that eclipses all others - perhaps he'll whip a cape over the disaster and distract me with some flash in the other hand. Or fit compassion into the cool hearts of his art lovers.

Deborah Eisenberg is a writer capable of handling the difficult retelling of New York's enormous blows in her story "Twilight of the Superheroes" from her recent Collected Stories of Deborah Eisenberg. I've been reading this huge collection for months, after this high recommendation from my friend Christina, "She writes the way I think." I knew what Christina meant by the first page: "...for a moment that seemed endless I had been pulled down into a forgotten period of my life when I, too, had strained to adhere to the slippery requirements of distant authorities." Honestly, I just want to hold up lines to show you - look at this! And this! And this from "Twilight:" 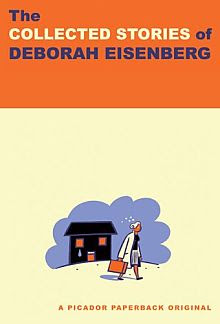 "Oh that day! One kept waiting -- as if a morning would arrive from before that day to take them all along a different track. One kept waiting for that shattering day to unhappen, so that the real -- the intended -- future, the one that had been implied by the past, could unfold. Hour after hour, month after month, waiting for that day to not have happened. But it had happened. And now it was always going to have happened." Which is about as perfect a description of our collective post-9/11 disbelief, and more specific grieving, as I've encountered in a while.

I've read Eisenberg's story "Days" three times now, after the first reading kept killing me softly with its song. An unnamed woman of undetermined age and means of support stops smoking which begins a downward slide told in precise declarative sentences that made me laugh with their blackness. "I feel as if years of rage have condensed around the sides of my brain and are dripping down into it, forming pools in which all its other contents are becoming sodden and useless."

"The ruin that is (her) life" is slowly saved by an introduction to the YMCA and its cold pool and running track, its "little tropical hut" of a sauna. The woman seems to relearn how to think, like a stroke victim relearning to speak, and her small improvements are about as close as Eisenberg gets in this beautiful and ambiguous collection to a positive resolution.

I know this character's fury and confusion and hopeful persistence. Sometimes to me too, "it seems that there is a growing number of women, and that I am not among them." If you can laugh with me at that great line, you too could love this story and this book.
Posted by Cindy Fey at 11:06 AM No comments: