An awful year. Monstrous Trump, his legions and all their damage and disasters. Randy's mother died in October. Aunt Ruth in the hospital twice. My brother Ron lost his job in California last week. Mia struggling.

It's been a good year. Randy's mother's second great-grandchild was born last month. Aunt Ruth came home from assisted care on Saturday and first thing, says Jeanne, had one of the hydrangea cupcakes I sent to welcome her home. My brilliant brother is thinking about moving to Stanford. His granddaughter Carolyn, our parents' first great-grandchild, is the most beautiful two-year-old in the history of the world. Mia slept in Wednesday morning and I took off work; she woke at noon and went straight to work on the Mali project that had had her in panicked tears the night before.

It snowed this month and we all complained, of course, but I still thought it pretty. And fitting.

Here's a new idea I just made up: polypolarity. How about multitudinous dysfunctional states of being beyond bipolar's two opposing moods? Countless spiky moods, each harsh in their own way. A spherical world of porcupine spikes, plateaus and variable canyons.

I scribble on a Post It at work: Everything I am, all my faults, my fears, doubts, anxieties, mental pains, guilt, I have chosen. I chose to blame all these failings on my broken family, to place them down within that well, to believe that is their origin story. Because by doing this, the act is an acceptance of the primary foundation of family. Family is everything, I have chosen to believe and embrace, even to my detriment. I could have gone another way, of course. Before my children there was another way.

The boy, a junior, who surprised me in his interview for the National Honor Society at Gordon Tech sometime in the 90's. "Family comes first," he said, when asked about his priorities. "Then school, then baseball."

It does? I wondered. I was a single working woman living with her boyfriend in Chicago. I could ignore where I came from, dive into work, go out with work friends on Friday, spend Saturdays at debate tournaments, Sundays grading. There was the Music Box and on Thursday night, Friends and ER. That could have been a peaceful life. Perhaps.

But there is power in accepting, power in the choice.

Sharon Olds, in her poem "Sleep Suite" reflecting on a perfect moment of peace when her two "nearly-grown" children sleep near her in a hotel room: "it is broken, the killership of my family, it is stopped within me."

There is power in deciding to accept everything, every God damned thing, as perfect.

Except, that is, for the things I can change. 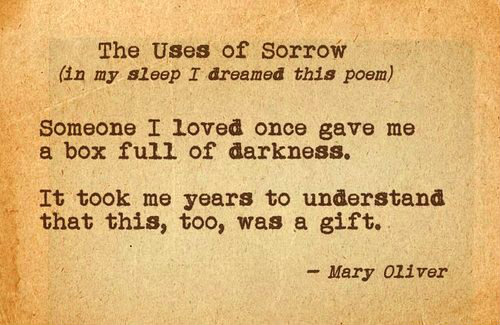 I've been reading this damn His Dark Materials series for a damn year or more, I keep putting it aside and returning to its classic YA fantasy goodness, the witches and gypsies and alternate-London and every person has a literal spirit animal to keep them company. There are zeppelins and a kingdom of ferocious polar bears and a world where elephant people have evolved to use the local seedpods as wheels under their diamond shaped torso-chassis, wonderful! One of the young heroes, a boy from Oxford, finds the Subtle Knife with which he can cut holes in the air and hence move between worlds to escape peril.

It was good walking for the first part of their journey. The sun was warm, but the pines and the rhododendrons kept the worst of the heat off their shoulders, and the air was fresh and clear. The ground was rocky, but the rocks were thick with moss and pine needles, and the slopes they climbed were not precipitous. Will found himself relishing the exercise. The days he had spent on the boat, the enforced rest, had built up his strength. When he had come across Iorek, he had been at the very last of it. He didn't know that, but the bear did.

And as soon as they were alone, Will showed Iorek how the other edge of the knife worked. He opened a world where a tropical rain forest steamed and dripped, and where vapors laden with heavy scent drifted out into the thin mountain air. Iorek watched closely, and touched the edge of the window with his paw, and sniffed at it, and stepped through into the hot, moist air to look around in silence. The monkey shrieks and birdcalls, the insect scrapings and frog croakings, and the incessant drip-drip of condensing moisture sounded very loud to Will, outside it.

I know why I am not galloping through the book, although my colleague who also loves the series says she finished it quickly in eighth grade. It's so immediately immersive -- one sentence will do to hook me in, plunge me into its universe. Will peeking into another world -- it's the very act of reading, of course. This book itself is the subtle knife working on me and I dissolve into it, the world falls away and I am safe again, for a moment, from this awful year.
Posted by Cindy Fey at 5:54 PM No comments: