"It was like entering Heaven. I'd just never saw anything so beautiful in my life." 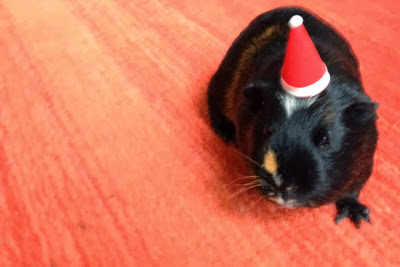 So it's back to New York next week, but not for fun, although it will be (Rockettes!), but the whole family is going for WORK, people! Because Prince has another gig!

Seems our guinea pig's BFF Lil Bub had such a fine time when Prince guest-starred on her Big Show, that he's been invited back!

For a holiday special! (No, not Christmas. It's show biz, remember, they shoot stuff months in advance.)

Featuring a star whose initials are A.S. and who has a writer brother and who Buddy the Elf once told, "You have such a pretty face, you should be on a Christmas card!"

(AND just as a crazy coincy-dinks, one time our friend Brent was walking in Manhattan with his brother and they saw her and Brent's brother ran back home to get a painting of meat that he had done and they caught up with her and gave it to on the street as a present. And she was very gracious.)

But you know and we know how these show biz things work, so we are trying to be realistic and understand that anything could happen and our cute baby could end up on the cutting room floor.

And even though our family knows Little Prince is the cutest little sweetiehead evah and a constant delight, we also understand that he's been called back not for his incredible cuteness but for his amazing stillness. I mean, this guy can SIT there like nobody's business. It might be some hard-core inner serenity, it may be mortal fear, it may be his bum leg, but our animal is one good sitter.

(And shitter. Sorry, had to go there.)

And sitting still is a very good quality for a TV animal to have.

Once you get the TV animal to the TV set. Not so easy, it turns out.

Since there's always got to be some drama, yesterday was plagued with ridiculous First World Problems while planning our trip. Like, did you know that most airlines don't allow pets in the cabin anymore? Surprise! Did you know that United has a special Petsafe program for transporting animals? I didn't, but when I heard that Prince might need to ride separate from us, I surprised myself by bursting into tears. I mean the little guy only weighs two pounds. And he's too pathetically dumb to find his way out of a paper bag (or maybe smart as a fox since that bag gives the semblance of the cave security he so craves?)

Anyway, after hours on the phone, Randy finds out American Airlines has, get this!, an Entertainment Division with a sub-department for Celebrity Pets. For real. So there's paperwork and multiple levels of approval and a vet certificate of health and even the pilot will be notified, but our Little Price will, Yes!, ride in style with his family in the cabin of the plane!

Here's Prince's debut that got him the new job. Amazing editing by Mike Berg, who made delicious Princely lemonade out of what looked to us onlookers in the studio like a lump of a rodent doing nothing:

Don't Say I Didn't Get You Anything for Christmas


Naissance de "Sympathy for the devil " (one+one... by cinocheproduction

Jean-Luc Godard films the Stones giving birth to "Sympathy for the Devil." From the 1968 film One on One. You're welcome. Does it give you chills like it does me?