So happy to be discussing Emma Donoghue's masterful, gripping and funny novel Room with the From Left to Write book club this week. Initially, the premise of the book, told from the point of view of a five year old boy gradually coming to the understanding that he has spent his entire life imprisoned in an 11 x 11 foot bunker by his mother's kidnapper, gave me the heebie-jeebies.

Enough with the morbid fascination for extreme cases of violence towards women and children. Enough with "Click Here for photos of the house of horrors." Don't feed the dragon.

Room turned out to be something very different. Jack's mother, despite nearly nightly rape, emerges not as a victim, but a resourceful and stunningly brave heroine, whose inventive construction of a particular version of reality has not only kept her son from physical harm in their tiny world but protected his innocence and sense of well-being.

When Ma takes an enormous risk, the pages of Room became some of the most terrifying I've ever read. When I reached that point, it was after eleven at night, I was the last one awake and I stood in our cold bathroom, crying with fear, unable to take my eyes off the story.

Then things got surprising and even more interesting. The story does not end here, as a conventional thriller would have. And the pages that follow force us to see the world we live in from the point of view of a three-parts-civilized, one-part-feral child, who, despite all, appears to have escaped damage.

Both Jack's unique position to observe the oddities of our modern world (crocs shoes, predatory talk show hosts, the chaos of the mall, grandmothers hooting "yoo-hoo!" at the playground) and his undamaged quality that his mother's creativity was able to preserve allow the book's second half to become dryly funny and very much so.

Which is pretty amazing to me because here's the thing about safe. The topic of safety is pretty hard to make funny. People on safety patrol can be awfully sanctimonious. Safe is the derogatory word used to describe second-rate art.

As I write this I sit in front of window offering a high-rise view of a Chicago parking lot below. A little person in pink wanders alone in the aisle as her big people lock up their car. There are no moving cars in the entire lot, but I can feel an unpleasant tension. Parenthood heightens most parents' Spidey-sense and the added acuity can sometimes balance out with a decrease in the humor-sense. Heard any good jokes about vaccines lately?

Room resonated for me in so many ways. The memoir I'm laboring over has an ongoing theme of safety's folly - the well-intentioned hoops adults jump through to try to keep and preserve the children in their care, how physical and emotional safety can come to be at odds, the tension of safety vs. independence and self-sufficiency.

I wrote several paragraphs last night (which I intended to share with you, but left behind on the desktop of the aforementioned high-rise) about my mid-teen years when my aunt and uncle worked their darndest to construct elaborate ways to keep me physically safe and sound despite absolutely no efforts from me to be dangerous. I was the abstemious virgin in the family, whose favorite habit was reading, who hung with spiffy clean crowds and neglected to get her driver's license until she was eighteen.

The innocence of which kind of made my guardians' over-protection all the more ridiculous, but if I take even a half second to ignore my own irritation at the earliest curfew I knew and the harshest grillings when it was overreached and take another half second to look at my aunt and uncle's obvious motivations, all humor in the situation comes to a full stop.

So you can see some of the challenges I'm facing trying to write the truth with both compassion and humor. Some days writing my story feels like constructing a jigsaw puzzle out of pieces of broken glass. And yet it's the joy in the past that I most want to convey, the joy in Jeanne and Chris's leap into the air next to the trailer, the joy that couldn't be extinguished, despite all. 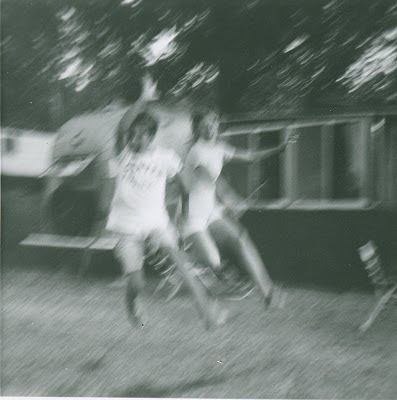 You can find more posts about Room at From Left to Write.

The participants in From Left to Write Book Clubs receive from the publisher a copy of the book discussed.
Posted by Cindy Fey at 10:58 AM

It is a great feat to tell a story about danger, while capturing the joy and positivity that also exists...in all life. I can't wait to read your memoir - keep at it!

You have a powerful story. Thank you for sharing it! I always say my primary job as a parent is to teach my children independence, but mostly I want to just roll them in bubble wrap. It's so hard to find that balance.