Have to interrupt our thrilling tale to show you the punishment for my baking hubris. I can make pies like nobody's business, and had plenty of confidence when I planned making cakes from scratch for Mia's school carnival. Oh, Joy of Cooking, you let me down. 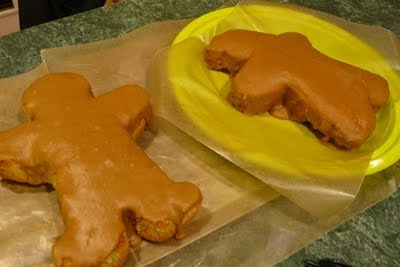 Swamp monster boy and girl. Their recipe was the Blitztorte, or "Lightning Cake" which tasted delish but failed to retain the face detail from the boy and girl molds. Then I made the dubious decision, based on limited ingredients, to cover them in a brown sugar icing. 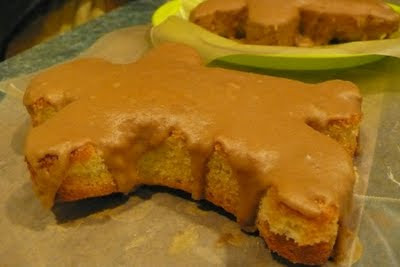 Not only did the icing resemble so much drippy mud, its recipe called for adding raw egg yolks to a simmering sugar mixture. I removed the pan from the heat and whipped like crazy, but the bits of scrambled egg in the icing cooked to a hard consistency that felt like flecks of plastic. Or baby fingernails. 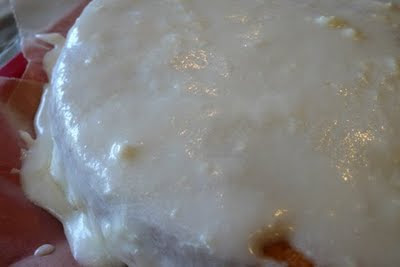 So I let Mia eat the boy and tried again. This monstrosity is the 1-2-3-4 cake which I'd love to say referred to some cutesy ingredient mnemonic, like "add one cup of sugar, two teaspoons vanilla, three cups of flour and four eggs." Nothing so simple. There was egg separation involved, and whipping of the whites to soft peaks and adding of the cream of tarter that I did not have on my shelf. The cakes looked pretty good, but the clock was ticking, I had to pick up Mia in half an hour and Joy didn't mention that their "quick" powered sugar and butter icing would have major lumps. 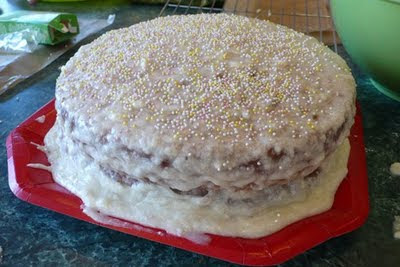 I can't blame the cookbook entirely. I splashed in some extra milk when the icing looked too thick, rendering it just drippy enough to ooze off the still warm cake. Here you see my attempt to doll it up with organic sprinkles. When I tied the plastic wrap above the cake with a little red ribbon, you could hardly tell there was a hot mess underneath. And in the hot gym that hosted our aptly named Fall Frenzy, no jazzed up grade-schooler cared.
Posted by Cindy Fey at 8:20 PM

These are so much better than anything anyone's seen comin' from my kitchen recently, folks here would probably call them miracles, not disasters!