Oklahoma is Everything: "It Was All A Pack of Lies" 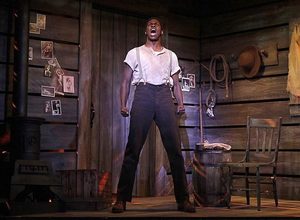 We watching Charlie Kaufman's I'm Thinking of Ending Things with the girls...actually that was after we had blown their minds with Being John Malkovich...actually, Nora might have stayed in her room and Mia watched with Randy and me...the climax of Ending Things had that actor that everyone recognizes but can't place...the blond Every(white)man who resembles a slightly skinnier and younger Seymour Hoffman...his name is Jesse Plemons, I think, and at the climax he sings a strange and beautiful song on stage and even though I played the French horn in the pit band of three musicals and witnessing three weeks of rehearsals will memorize the script and score on your brain even if you don't try, this strange little song did not ring a bell.

So my Interweb research-rabbit-hole-dive dug up the Rogers and Hammerstein "Lonely Room" and before I found Plemons' version, I came across THIS which changed everything, as it should. The character who sings the song is the tortured, tragic Jud the Hired Hand and he will soon die. The rest of the characters will rally and move on and celebrate statehood and marriage with Everyone's Favorite Musical Reprise and Ode to Triumph, "Oklahoma!" The "bullet-colored" disturbance in the force has been eliminated and Whiteness Perseveres!

As has happened over and over in this cliff of a learning curve year. The scales fall from my eyes and I jump up from my computer, rush into the family room where Randy is playing his game and Mia is multi-tasking at the kitchen island, and pronounce, "THE MATRIX IS REAL!" Then again, for the people in the back, but this time with a lispy Valley-Girl pronunciation, squared shoulders and a sassy finger in the air: