These Boys Will Break Your Heart, Again

I'm still reeling from the news of the shooting death of Child, a boy I've known for four years ever since he was fourteen in freshman English class.

And thinking about Child, and feeling the pain, still growing, and the anger, perhaps misplaced, and the confusion, maybe from the newness of the grief, brings me back to the moment before Thanksgiving when I learned about Greg.

That is his real name, Greg, because he's not a child whose privacy and family I need to protect. And how I loved that his last name rhymed with mine when we partnered up. And how we did partner!

As high school friends, as brass players in band, as carpooling to and from school, as Rocky Horror fans, as Forensics Team officers at our high school Center High in Kansas City. In the National Forensic League we were lowly officers, something like the office of "Publicity" which basically meant that we planned the end of the year hotel ballroom banquet and we got a day off school to attend a coveted "leadership conference" in a(nother) bland hotel ballroom, but we relished the title. We partnered as a terrible Duet Acting team at one of those NFL competitions (some mild riff on The Three Bears, perhaps), and as prom dates. We made the team of Fey and Day. Like it was meant to be.

I remember a hundred stories over the six years of junior high and high school, as we got closer, and even though I had a low level crush over those years and even though we hooked up a bit towards the end (isn't it always a sign of the end?) Greg was primarily a Friend, the dearest of Friends. I pray that is how he remembered me.

I hope he remembered us well, not just the two of us, but "us" as in all the friend and club groups we overlapped with and danced through, swapping partners and allegiances and not all his friends and girlfriends were mine too but that was okay. He had Spanish club; I had French.

It's the laughing that I can't forget -- near hysterics in a booth at Winstead's on the Plaza, in his car, in the stands at football games for pep band, under the stage for pit band for the different three musicals, in the cemetery where we sneaked in at night with four other friends, at McDonald's where our dear friend Lori worked, at the Punk Dance with Diane, at the Royals baseball stadium, at the secret lake we found down State Line.

Once we left for college, he faded away after a few letters. Someone said he had a girlfriend. I wondered was it me? when I had time to think about him, but I was busy too, swept up in a new school to transfer to sophomore year, a new state, new friends, a rush of quick years and much change.

So when I saw in the memorials on Facebook that so many other friends loved him too, felt as close and as grateful for his warmth and love, and also related the separation, I knew it wasn't just me. He married not long after college and so many of us didn't even know.

I wondered if it was a religious thing -- had he converted? Did our drinking and making out in his brother's attic scare him off? But no, the pics of his apparently happy years were relaxed and comforting -- travels with his wife and daughter, beer steins in Germany, sunny summer lakeside tables, the piazza in Venice.

I'm at peace. A bit surprised that I'm not more sad, because we really were close.

We were sitting on the front step of Uncle Phil and Aunt Ruth's house, a concrete step where we never sat, but that was okay. I didn't see it coming when the topic turned to Prom and I said Tonya and I were going to hang out and watch movies so when he asked, "Do you want to go?" I heard it as a general inquiry and sang out, "Yes! Of course I want to go!" and the turn of his face and his expression as he said, "No, I meant with me," was one I'll never forget. 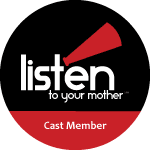